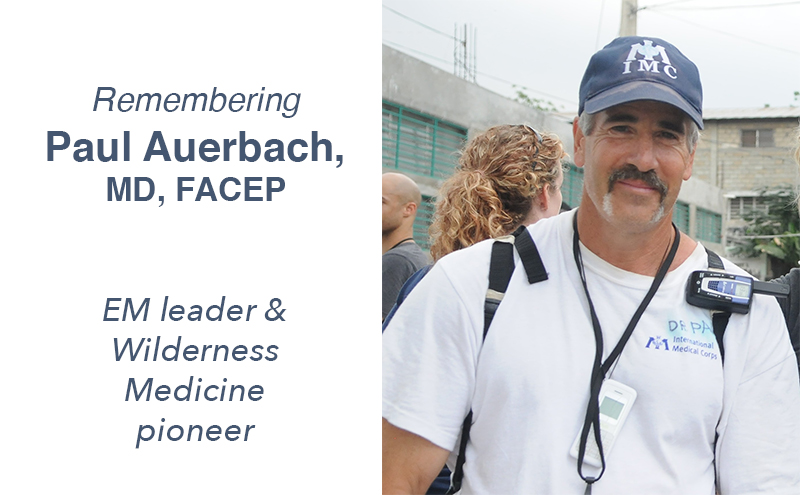 After graduating from medical school at Duke University, Dr. Auerbach completed his emergency medicine residency at Ronald Reagan UCLA / Olive View UCLA Medical Center. He joined ACEP in 1984, and quickly became involved in research and education. He was an Editorial Board member for Annals of Emergency Medicine from 1987 to 1991.

A champion of wilderness medicine as a distinct area of emergency medicine, Dr. Auerbach became the editor for the Journal of Wilderness Medicine from 1990 to 1995 and then wrote what is considered by many to be the definitive textbook on the practice, Wilderness Medicine. He also authored Medicine for the Outdoors and was co-author of Enviromedics: The Impact of Climate Change on Human Health and Field Guide to Wilderness Medicine.

In 1999, Dr. Auerbach was awarded the ACEP’s Judith E. Tintinalli Award for Outstanding Contribution in Education, one of the College’s highest leadership honors.

He served on several ACEP task forces, including the Sports Related Head Injury Task Force and the High Threat Emergency Care Task Force. He was an officer of the Emergency Medicine Foundation’s Board of Trustees and was EMF’s Secretary/Treasurer in 2020. He demonstrated his dedication to EM research by joining the EMF Mentor Circle and funding the Climate and Emergency Medicine Research Grant.

He was a founder of the Wilderness Medical Society, member of the Council on Foreign Relations, and served on the National Medical Committee for the National Ski Patrol System. He was a first responder to the earthquakes in Haiti (2010) and Nepal (2015) and was a visiting scholar at the National Center for Disaster Medicine and Public Health. Previously, Dr. Auerbach was Chief of the Divisions of Emergency Medicine at Vanderbilt University and Stanford University.

In his ACEP faculty bio, it was noted that Dr. Auerbach was “enormously grateful for opportunities to be with his family, friends, and colleagues, who understand the importance of ‘giving back’ and trying to make the world a better place.”