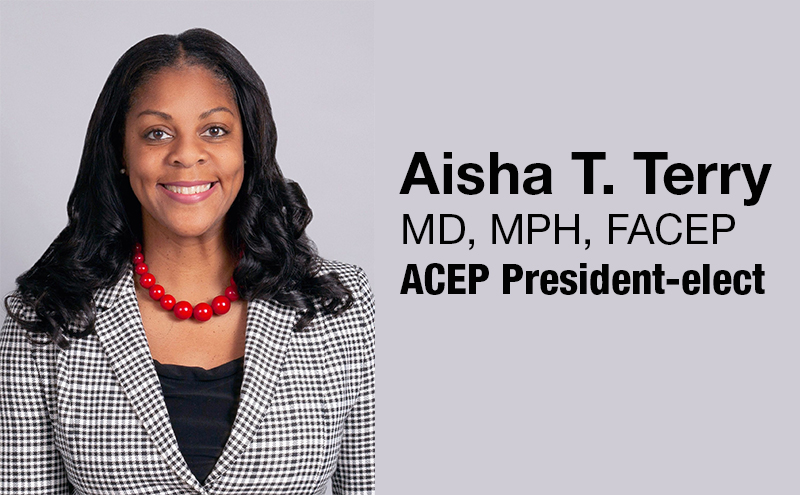 Election Results: Dr. Terry is ACEP’s Next President-elect, Plus Four Board Members

On Thursday and Friday in San Francisco, the ACEP Council is conducting its annual elections.

On Thursday, Sept. 29, Aisha T. Terry, MD, MPH, FACEP, from Washington, D.C., was elected ACEP’s new President-elect. Dr. Terry will serve one year as President-elect before becoming ACEP President during ACEP23 in Philadelphia. She was first elected to the Board in 2017 and served as Vice President of the Board in 2021-22. It’s a historic moment for ACEP; Dr. Terry will become ACEP’s first Black president.

Dr. Terry is an associate professor of emergency medicine and health policy at the George Washington University School of Medicine and Milken Institute School of Public Health in Washington, DC. She is the senior advisor to the George Washington University Department of Emergency Medicine Health Policy Fellowship and chief executive officer of the Minority Women in Science Foundation (MWSF), a non-profit organization that empowers the dreams of future leaders with interest in science careers. She received her undergraduate degree from Duke University, her medical degree from the University of North Carolina at Chapel Hill School of Medicine, her emergency medicine residency training from the University of Maryland, and her Master of Public Health from the Columbia University Mailman School of Public Health.

The Council also elected four members to three-year terms on ACEP’s Board of Directors:

Jeffrey M. Goodloe, MD, FACEP, (incumbent) is professor of emergency medicine, EMS section chief, and director of the Oklahoma Center for Prehospital and Disaster Medicine in the Department of Emergency Medicine at the University of Oklahoma School of Community Medicine. He works clinically at Hillcrest Medical Center Emergency Center in Tulsa, Oklahoma and serves as chief medical officer for the EMS System for Metropolitan Oklahoma City and Tulsa. He is the medical director and a tactical emergency physician for the Oklahoma Highway Patrol. Dr. Goodloe received his medical degree from the University of Texas Health Science Center at San Antonio and completed an emergency medicine residency at Methodist Hospital of Indiana/Indiana University School of Medicine.  He subsequently served as the inaugural EMS fellow at the University of Texas Southwestern Medical Center at Dallas.

Gabe Kelen, MD, FRCP(C), FACEP, (incumbent) is the current chair of the Department of Emergency Medicine at Johns Hopkins University in Baltimore. Dr. Kelen is director of the Johns Hopkins Office of Critical Event Preparedness and Response. He is also a professor of anesthesiology and critical care and health policy and management. Dr. Kelen has extensive experience with public health and infectious disease with a focus on emerging infections. He is a former president of the Society for Academic Emergency Medicine, Association of Academic Chairs of Emergency Medicine and was elected to the National Academies of Science. Dr. Kelen received his medical degree and completed his residency with the University of Toronto and completed an emergency medicine residency at the Johns Hopkins University School of Medicine.

Kristin McCabe-Kline, MD, FACEP, is vice president and chief medical information officer, AdventHealth Central Florida Division, and EMS medical director, Flagler County/City of Palm Coast/City of Flagler Beach. She is the co-founder and chief medical officer of WaterSafe, a nonprofit organization dedicated to drowning prevention and water safety. She previously served as vice president of an independent democratic physician group serving patients across the Central Florida Division North Region of AdventHealth. She is an ACEP Councillor, member of the Council Steering Committee, and served two terms as president of the Florida College of Emergency Physicians. Dr. McCabe-Kline received a medical degree from the University of Texas Health Science Center at San Antonio, Texas and completed an emergency medicine residency at Advocate Christ Medical Center in Oak Lawn, Illinois.

Ryan Stanton, MD, FACEP, (incumbent) is an emergency physician with Central Emergency Physicians in Kentucky. Dr. Stanton is the EMS medical director for Lexington-Fayette Urban County, and medical director for the AMR/NASCAR safety team and other EMS agencies. Dr. Stanton is a chief medical contributor for Fox 56 News and creator/host of the ACEP Frontline podcast. He is a past president of the Kentucky Chapter of ACEP. Dr. Stanton has a medical degree from James H. Quillen College of Medicine and completed his residency in emergency medicine at the University of Kentucky.