A 55-year-old helmeted male with a past medical history of hypertension, hyperlipidemia, and hypothyroidism, presented with left ankle pain and left leg pain after hitting black ice and falling while riding a motorcycle. The physical exam was significant for an obvious deformity of the left lower extremity with external rotation of the left foot. The neurovascular exam was intact.

While in the emergency department, a popliteal sciatic nerve block was performed (Figure 2) for reduction and splinting of the fracture. The patient reported a pain scale of 6 out of 10 prior to the nerve block, and after the nerve block, it was reduced to 1 out of 10. He did not require procedural sedation for the reduction procedure and tolerated the procedure well. The patient was admitted to the orthopedic service for operative management.

Popliteal sciatic nerve blocks may be used in the setting of most ankle fractures, dislocations, foreign bodies, lacerations, and cellulitis.1,2,3

The sciatic nerve can be located above the popliteal crease and followed down distally as it becomes more superficial and then it will split into the tibial nerve (TN) and the common peroneal nerve (CPN). Most studies demonstrate that best pain relief is achieved when the nerve is blocked at the bifurcation (Figure 3).3-6 Enveloping the TN and CPN at its bifurcation is a connective tissue sheath called Vloka’s sheath.3,6

The nerve block will provide sensory anesthesia to most of the lower extremity except the medial malleolus (Figure 4). This procedure will also provide motor blockade to the muscles of the posterior aspect of the leg.3

The best positioning, if the patient can tolerate it, is to place the patient in prone position. In-plane technique with a lateral approach is preferred (Figure 5). Depending on the patient’s anatomy, an out-of-plane approach is also possible.

If the patient cannot tolerate the prone position, the nerve block can also be performed with the patient in supine position (Figure 6).

For this procedure, one will need a linear probe with high frequency such as a L12-5 MHz or L12-4 MHz, a sterile-probe cover with sterile ultrasound gel, chlorhexidine swab stick, a fenestrated drape, a 20G blunted needle, a 20cc syringe, local anesthetic of your choice, and tubing to connect the needle to the syringe to allow for maneuverability.

The ultrasound settings should be optimized for nerve visualization and the gain and the dynamic range set for needle tip visualization. The depth should be set at about 3-4cm and, prior to beginning the procedure, the nerves (shallow) and the vessels (deep) must be identified. The nerves have a honeycomb appearance and vessels will be anechoic. Color Doppler may be used to identify the popliteal artery and vein. The sciatic nerve should be identified above the popliteal crease. While the ultrasound probe is in the transverse position, the probe can be moved caudally to identify the sciatic nerve bifurcating into the TN and CPN. As it was mentioned above, an in-plane approach is preferable with the needle entering from the lateral side. The needle positioning may be identified by direct visualization, by secondary indentation, or by the presence of reverberation artifact. It is important as with all nerve blocks to maintain constant visualization of the needle tip as it is advanced toward Vloka’s sheath. To aid in puncturing through Vloka’s sheath and avoiding intraneural injection, the needle tip should target the space between the TN and CPN.

Next, draw back on the syringe prior to injecting the anesthetic to ensure the needle tip is not within a vessel. Finally, 15-20mL of local anesthetic is required to bathe the sheath that envelops the TN and CPN.

Although rare, one must be aware of two complications which may have grave consequences. First, intraneural injections must be avoided. Peripheral nerve injury could occur either in the setting of direct shearing of nerve fascicles, or by direct injection of anesthetic into the nerve. Constant needle visualization is of paramount importance. When intraneural injection does occur, 99% of patients with nerve damage will have resolution within one year.7

Second, local anesthetic systemic toxicity (LAST) is a complication that if not recognized rapidly has a high mortality. Symptoms of LAST toxicity start initially with neurologic symptoms followed by cardiac symptoms and finally cardiac arrest. Patients may initially report tongue numbness, have muscle twitching leading up to seizures and coma. Respiratory arrest usually precedes cardiac arrest. One should always calculate the maximum doses of the desired local anesthetic and have access to intralipid in case of LAST toxicity.7

The use of opioids can have deleterious effects, especially in the elderly and other high-risk populations such as obese and pediatric patients.2,5,8 It has been shown that pain is undertreated in the elderly population and that opioid use can lead to over-sedation, confusion, and delirium.8 Furthermore, studies have shown that patients report better pain control with regional nerve blocks and have a quicker time to recovery.8 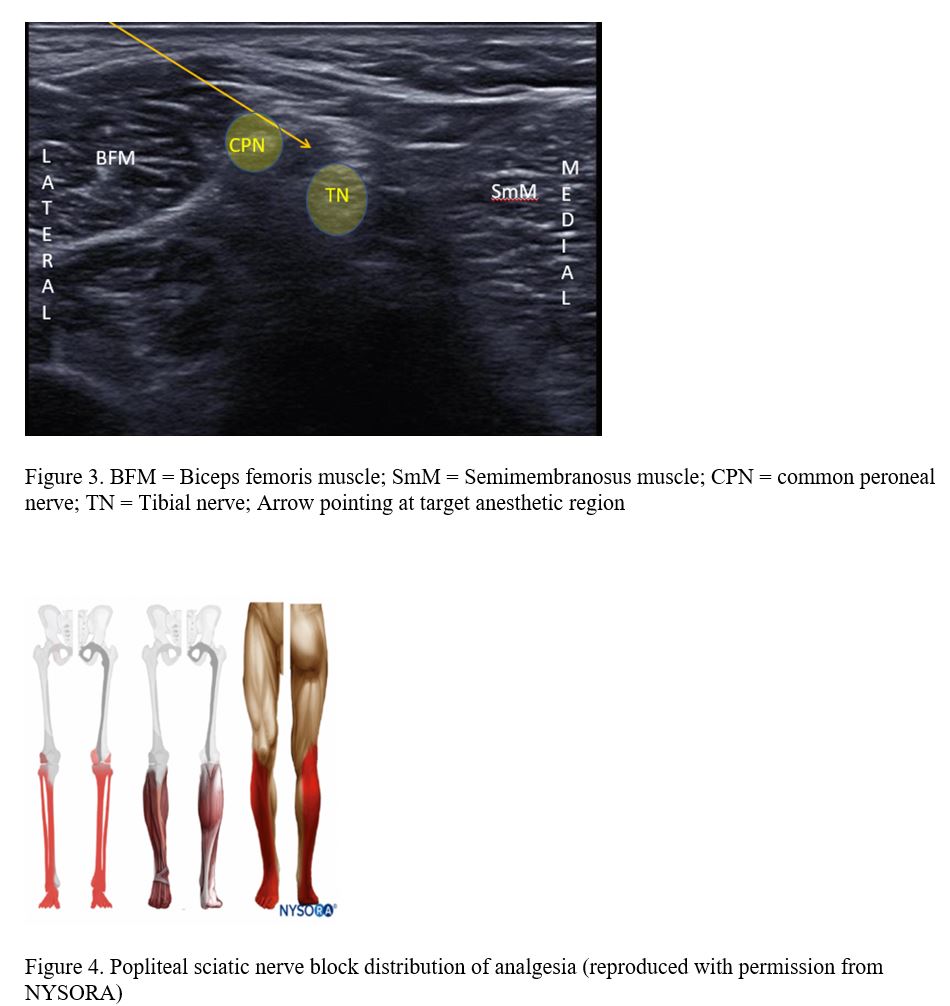 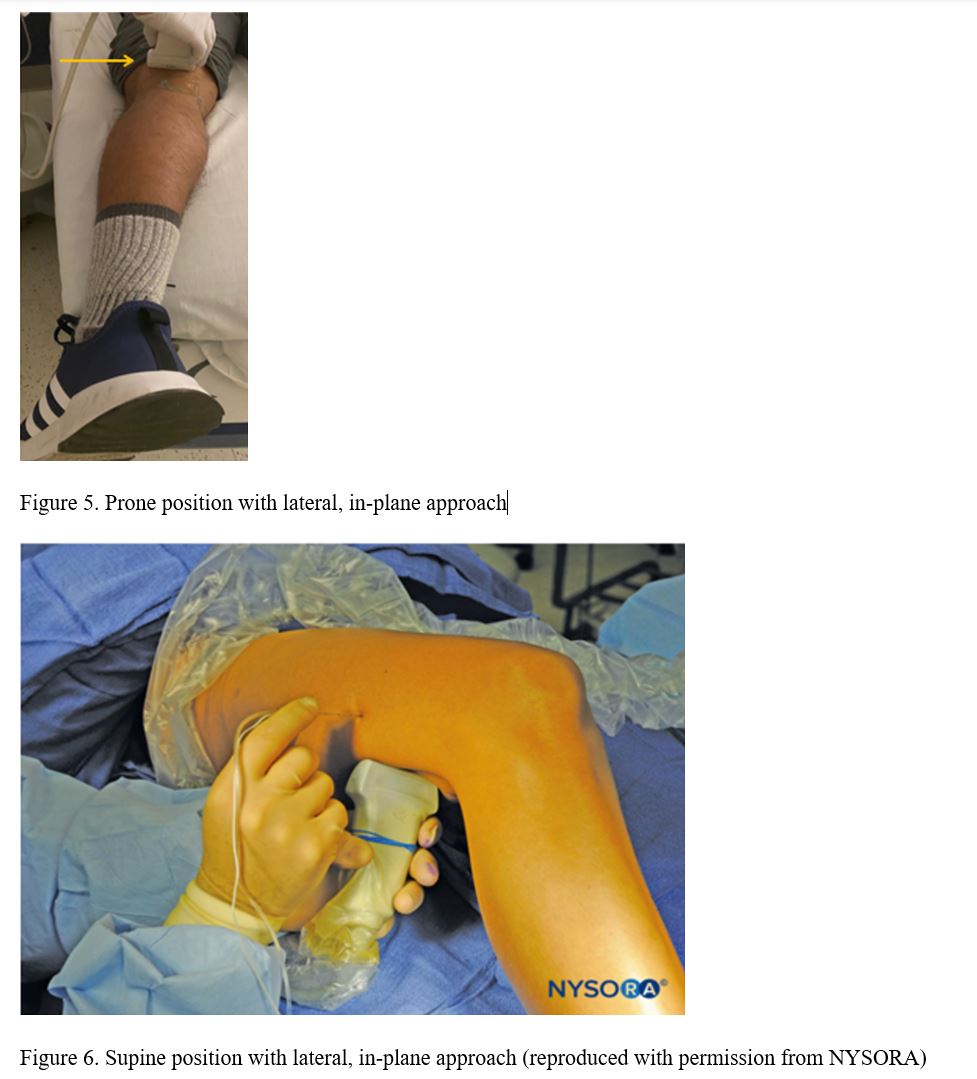