Dermal fillers offer patients facial rejuvenation through the treatment of volume loss and wrinkles, facial sculpting, facial contouring, and soft-tissue augmentation.1,2 They are widely available and popular, due to ease of use and reasonable cost.3 Americans spent more than $1.6 billion on such non-surgical procedures in 2019, of which women accounted for 90% of all injectables.1 The market offers numerous injectable fillers, the most widely used include calcium hydroxylapatite (Radiesse®), hyaluronic acid (including Juvederm® Ultra, Ultra Plus, Voluma, Restylane® Lyft, Belotero®) and Poly-L-Lactic Acid (Sculptra®) (ASAPS). Adverse effects are generally self-limited, resolving within two weeks and can include pain, erythema, ecchymosis, edema, and itching.4 While cosmetic facial soft tissue fillers are popular and relatively safe, vascular occlusion is a rare but devastating consequence that can lead to skin necrosis. Vision loss due to vascular occlusion is the most significant adverse event reported after dermal filler injection into the forehead.5 Physicians should be able to identify the presentation of vascular occlusion after injection of dermal filler and be knowledgeable of its management.

The first signs of necrosis are pain and blanching of the tissue during injection followed by a dusky discoloration. In the event occlusion occurs, the performing clinician should stop the injection and try massaging filler back in attempts to remove the blockage. Regardless, which filler is used, the patient should receive hyaluronidase into the injection site, followed by 2% nitroglycerin paste on the compromised area. Warm compresses applied to the area increases vasodilation. Sildenafil 100 mg can also be added to facilitate dilatation. Patients should be started on a steroid taper (such as methylprednisolone dose pack). Aspirin and even low molecular weight heparin injections are started, unless there is a contraindication, to prevent further vascular compromise due to clot formation. 6

To increase the likelihood of survival of compromised tissue, hyperbaric oxygen therapy (HBOT) should be considered, particularly in severe cases. Through multiple animal and clinical studies, HBOT has demonstrated increased tissue survival through numerous mechanisms, including increased tissue oxygenation, enhancement of fibroblast and collagen synthesis, neovascularization, and by closing arteriovenous shunts. The primary anti-ischemic effect of HBOT comes from hyper-oxygenation, which increases the diffusion length and depth of oxygen through the tissues. HBOT increases stem cell proliferation and accelerates angiogenesis, which facilitates the process of healing.7 This is of particular importance to the patient with compromised tissue following dermal filler, as it facilitates microcirculation and reduces edema.8

We recently had a case that demonstrates the potential role for HBOT in the care of such patients. A 29-year-old woman presented with bruising and numbness to the skin overlying the left maxillary sinus, after Radiesse® filler placement to the left cheek one day prior at a medical spa. She initially presented the day after filler injection to her dermatologist, who had not actually performed the procedure. The dermatologist injected hyaluronidase, applied nitroglycerin paste to the affected area, and started the patient on aspirin and systemic steroids. In addition, the patient was referred to our HBO facility. During our evaluation, the patient was found to have a dusky discoloration of the injected area and numbness of the skin. Ecchymosis was present around the left periorbital, infraorbital area and along the left side of the upper gum line. (Fig 1A & 1B) 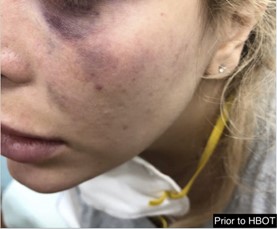 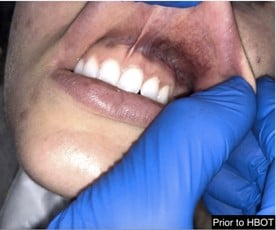 After her first HBO treatment, she demonstrated significant improvement, and the tissue appeared pink where she previously had a dusky discoloration. Ecchymosis around the gum line had also improved. After her second day of treatment, she underwent laser therapy with her dermatologist to reduce the discoloration related to bruising. The patient continued to improve with each subsequent HBO session, until all of the dusky discoloration resolved, and most of the bruising had improved. In addition, the areas of facial numbness had some return of sensation by the end of her HBO treatment course. In total, our patient underwent five treatments at 2.4 ATA for 90 minutes with 100% oxygen and demonstrated a robust clinical response. (Fig 2) 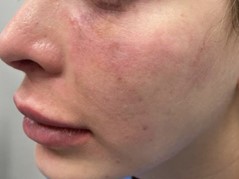 Considering the patient’s age and her desire for a good aesthetic outcome, HBOT was particularly important to consider in order to minimize lasting sequelae. While the protocol for vascular compromise after filler injection has not been established, it is recommended that HBOT be started immediately following the adverse event and continue until the lesion is improved.4 As this case illustrates, seemingly innocuous in-office (non-surgical) procedures can have significant morbidity. Clinicians should be able to recognize vascular occlusion after injection of dermal filler and consider HBOT early in its course to prevent the devastating long-term effects of skin necrosis.