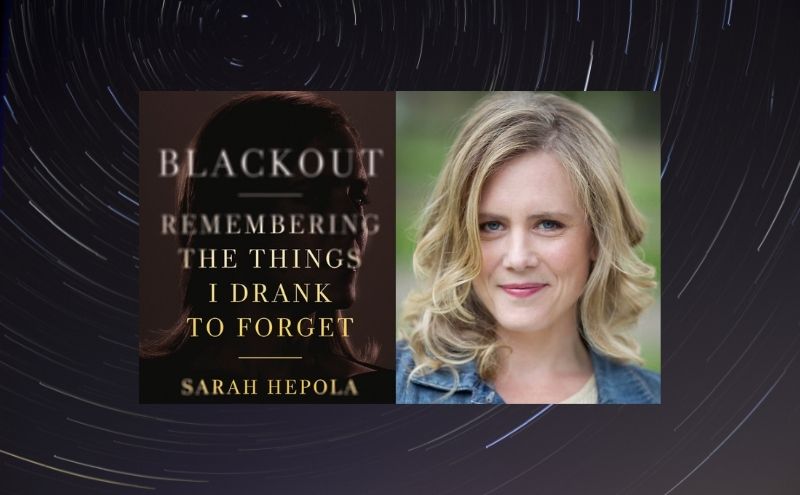 Book Review: Blackout – Remembering the Things I Drank to Forget

Sarah Hepola is a staff writer and editor at Salon and has published in several other online outlets and magazines. She lives in Dallas, TX and BLACKOUT: REMEMBERING THE THINGS I DRANK TO FORGET” is her first book.

Initially I didn’t like this book at all. My initial impression was that it was a light-weight dust bunny from the chick-lit corner of the discount bin. That sounds a little harsh but Ms. Hepola relates many embarrassing anecdotes of drinking and blacking out in a bar or at a wedding or a birthday party. She waits with apprehension for the after-morning phone call from her friends relating whatever humiliating and debased activities she engaged in while on parry-girl autopilot.

The author spent several decades in denial of her addiction and its destructive effects on her family and romantic relationships and friendships and work. Eventually she “sobered up” and began the second half of her life clean and introspective and mature.

In a way that is an unfair and superficial summary of her life, but that is one of the problems with the book. Aside from embarrassing herself over and over again, nothing really terrible happens to her or the people around her. She doesn’t injure or kill anyone, she isn’t arrested and she isn’t even fired from any of her jobs. Her health isn’t seriously affected aside from an occasional unexplained bruise or abrasion and she doesn’t suffer from any short, or long-term health consequences. If her drinking was so out of control and her life was a nightly drunken train wreck why is it that nothing of any actual consequence happens to her?

I read the book expecting and waiting for something really terrible to happen to the author but - nothing. In her sobriety and while researching this book, Hepola interviews several neuroscientists about what happens during an alcohol-induced blackout. This is where the book has value.

She explains that through a series of neurochemical events, alcohol will shut down the hippocampus, which is the part of the brain that creates long-term memory. That leaves just the part of the brain that creates short-term memories with which to function. Since short-term memories typically last less than two minutes, intoxicated people that are in that state of blackout appear to have some mental faculty and can follow an uncomplicated train of thought from point-to-point until they start to repeat themselves. Their understanding of what is happening around them is processed into tiny bits of incomplete input data but they can do a pretty good job of faking it. With some practice, they can be charming and tell stories at a party or be entertaining and witty at a bar but have no memory of it because the memory was never processed or stored for more than those few minutes.

Hepola describes different types of blackouts - there is something she calls a “brownout” which is like flicking a light switch on and off - you remember ordering your drink but not walking to the bar to get it; you remember kissing someone but not who made the first move or the events leading up to the kiss.

For Hepola, the brownouts eventually all become blackouts. Not only can she not remember who made the first move, she doesn’t remember kissing the guy or even meeting him - just waking up in bed naked next to a man she has never seen before.

What is most interesting about this book is the critical reaction it received and the inside-out interpretation given it by many reviewers. It seemed that most reviewers loved the first two-thirds of the book which details all the falsely unrealistic romantic, self-destructive actions and hated the last third of the book in which Hepola struggles to find sobriety, recovery and understanding of her disease. I felt just the opposite - I was unimpressed by the lurid tales of drunken debauchery and low-impact drinking and carousing. It was the author’s gradual self-actualization that made this book worth reading.

Hepola’s downward spiral is not terribly interesting and her recovery isn’t either - she quits drinking and through diet and exercise manages to lose 60 pounds in 6 months. She learns how to play the guitar with just a little bit of effort. She mends fences with old friends with surprising ease and success and faces down her embarrassing demons with little fanfare or revelation or drama.

Altogether the story of the fall and rise of Sarah Hepola is kind of boring. What interested me was her rejection of the usual new-age, navel-gazing, faddish, feel-good, myopic, self-centered, indulgent, and narcissistic approaches to sobriety and recovery and her embrace of Alcoholics Anonymous and religion.

This feminist icon became a devoutly religious, if not pious person. Her whole-hearted acceptance of and reliance on religion seems at first to be a substitute sort of addiction. Hepola’s self-examination, however, seems authentic and genuine and has real gravity.

I’m happy that Hepola has found sobriety. She is a fiercely intelligent individual and she writes very, very well. Her description of how she wasted so many years of her life in chasing alcohol and celebrity and romantic love as objects of worship is heartbreaking but her acceptance of religion to fill the “God-shaped hole” that all humans have is moving and affecting.

Hepola’s story serves as a terrifying reminder of the dangers of romanticizing alcohol, binge drinking and blackouts. One of the things that stayed with me after finishing the book is some advice that Hepola was given during her research on blackouts. A friend told her “When men black out they do things to the world. When women black out the world does things to them.” Solid advice from a very good writer.