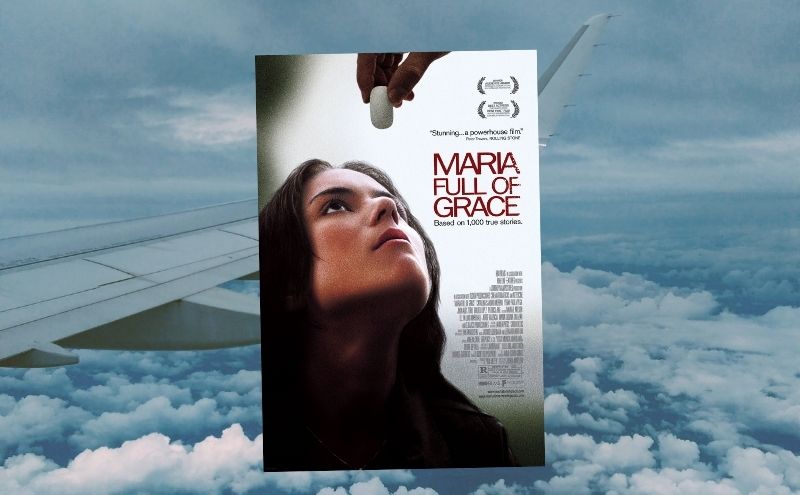 Maria Full of Grace from 2004 is a harrowing movie that documents the terrifying and desperate journey of a pregnant young woman who, in an attempt to escape her dead-end future in a tiny, run-down Columbian village near Bogota, makes the fateful decision to become a cocaine mule (a drug smuggler). The movie stars the beautiful and understated Catalina Sandino Moreno, who was justifiably nominated for an Academy Award for her portrayal of the ferociously intelligent and determined title character (Maria). The movie is very well done and demonstrates in unblinking detail Maria’s meeting with the ruthless drug cartel, the creation of the drug packets and her preparation and training on how to swallow the large, bullet-shaped, pure cocaine filled, wax-sealed condoms. Maria is a victim of economic and social pressures, but she doesn't think like a victim. She has grit and can improvise and the movie wisely avoids the usual cliches about the drug cartel which is shown as businesslike but primitive and run by people more dimwitted than evil. There are no machineguns or shootouts. It focuses on the human drama, and Maria engages our sympathy.

The movie follows our heroine through the Columbian airport and onto the airplane bound for New York City. The portion of the movie that takes place on the airplane is one of the most terrifying scenes in movie history as Maria and two other mules watch the clock (and each other) and they get closer to the United States (and Customs control) and then everything goes sideways. In one of the most suspenseful scenes ever filmed, Maria begins to prematurely pass the packets in the bathroom of the plane and has to re-ingest them and without giving too much of the plot away, one of the women she is traveling with begins to develop signs of cocaine toxicity due to one of the condoms leaking inside her intestines. Maria has to try to assist her friend while avoiding suspicion and capture on the plane. Once the plane lands, Maria has to find a way to avoid capture by the American Customs agents, help her friends also avoid detection and capture and get her sick, cocaine poisoned companion through the airport and deliver her and the cocaine into the hands of cartel members assigned to intercept them and keep them in a sleazy hotel room until all the packets are delivered.

The action and the suspense never stop for a moment. The cloak-and-dagger momentum never lets up and the ending is not predictable or inevitable but is logical. “Maria Full of Grace” is a brilliant movie that gets an A for entertainment and an A for realistic portrayal of the physiologic effects of cocaine and the brutal and remorseless lives of the cocaine cartels and the people who belong to them. Movie Review: Once Were Warriors