Vaping and its Consequences: A Case of Vaping-Induced Lung Injury

E-cigarettes, introduced in 2007, have been marketed as a safe alternative to tobacco, helping curb nicotine addiction and its disease sequelae. Its use has been gaining popularity, especially in younger generations. According to the FDA, 3.62 million middle and high school students were using e-cigarettes in 2018. During 2017-2018, use of e-cigarettes rose from 11.7% to 20.8% among high school students (1). Emerging evidence has shown e-cigarette use can lead to serious complications, including respiratory illness and death. With the recent dramatic increase in respiratory-related illness associated with vaping, public health departments in certain states are now alerting clinicians to be on outbreak surveillance. With increasing evidence of outbreaks related to vaping and severe pulmonary disease, this case report summarizes the clinical characteristics of a patient with a past medical history of moderate persistent asthma and anxiety who presented with symptoms of hypoxic respiratory failure requiring intubation. Although a history of asthma and anxiety can lure clinicians into an initial diagnosis of asthma exacerbation, more awareness should be placed on vaping history to decrease the development of life-threatening pulmonary injury within this patient population.

A 22 year-old male with a past medical history of moderate persistent asthma and anxiety disorder was found lying face down outside by his parents at home. Parents took him to primary care physician the next day and was prescribed 60 mg of prednisone. Patient showed worsening symptoms and presented to the emergency department with dyspnea and nonproductive cough the next day. Labs, imaging, and vitals revealed: WBC 12.8, temperature of 101.7 F, and chest x-ray showed increasing bilateral infiltrates. Patient was treated empirically for community-acquired pneumonia with ceftriaxone and azithromycin, and asthma exacerbation with prednisolone. Clinical worsening ensued, with the patient progressing from needing high flow nasal cannula to being intubated for hypoxic respiratory failure four days after onset of symptoms. Patient was transferred to a tertiary institution for suspected ARDS. On Day 1 of hospitalization, patient had coffee ground emesis on OGT suction 170ml, was put on pantoprazole 40mg po BID and closely monitored for upper gastrointestinal bleed/melena. On day 2 of hospitalization, chest CT showed diffuse bilateral ground glass opacities with peripheral sparing in all lobes of both lungs (Figure 1). Respiratory viral panel and urine legionella Ag screening were negative. Procalcitonin was within normal limits. Laboratory results were significant for a white blood cell count of 16.7. Antibiotic coverage was increased to vancomycin/piperacillin and tazobactam due to the development of a low-grade fever on day 4 of hospitalization. Bronchial alveolar lavage from right upper and middle lobe on day 4 of hospitalization was negative for malignant cells, thin prep slide showed few alveolar macrophages and benign bronchial epithelial and squamous cells.

After careful exclusion of all other causes, patient was suspected to have acute respiratory distress syndrome (ARDS) due to inhalation lung injury due to vaping.  Patient was extubated on day 5 of hospitalization, transitioning to nasal cannula 4L. When asked about substance use, patient confirmed vaping use preceding development of symptoms. Psychiatry was consulted due to past psychiatric history of anxiety and substance use.

On psychiatric evaluation, patient described having an extensive past history of anxiety disorder. According to his father, patient has had a trial of multiple medications, including various selective serotonin reuptake inhibitors (SSRIs), and gene testing was done as an outpatient to find the best medication regimen for him to control his anxiety. Home medications included alprazolam 1mg twice daily for anxiety, alprazolam 2mg twice daily as needed, and melatonin 2mg nightly for sleep disturbances. Patient saw an outpatient psychiatrist to manage his feelings of depression and anxiety. The patient’s parents were supportive and wanted to help taper him off alprazolam, with the goal of eventually finding a new outpatient psychiatrist.

Patient stated that medications only partially controlled his anxiety but turned to self-medicating to alleviate his anxiety. At age 14, patient started using marijuana and cigarettes. As his anxiety worsened, patient started increasing marijuana and cannabidiol (CBD) use, both by smoking and consumption. This use continued after the patient graduated high school and into college, from which he dropped out after a year. The patient currently works as a receptionist. Through his co-workers, the patient got access to CBD and tetrahydrocannabinol (THC) vape cartridges to help him relax.  Patient stated he would buy cartridges from co-workers or drive to a neighboring state to legally buy cartridges. Patient confirmed using “Dank Vape” Sour Diesel Sativa Dominant hybrid (26% THC) before hospitalization.

Patient had no history of psychiatric admission and denied suicidal or homicidal ideation, auditory or visual hallucinations. He denied increased activity, and flight of ideas. On interview, patient reported feeling anxious, remorseful for his actions, and expressed gratitude for getting another chance in life.

After six days of hospitalization, the patient was transitioned to room air and tapered off of methylprednisolone. Patient recovered and was discharged with antibiotics for 5 days with outpatient follow-up with pulmonology.

E-cigarettes are battery operated devices that heat a liquid and deliver a vapor. Common substances that are aerosolized are nicotine, CBD, butane hash oils (dabs), and THC. Inhalation exposes the user to not only to the intended substance, but harsh unknown chemicals that the lung cilia cannot handle, including but not limited to ultra-fine particles, carbonyls, cutting agents, diluents, organic volatile compounds, flavorants like diacetyl and 2,3-pentanediol, and more (2). According to the most recent report as of September 6, 2019, there have been 450 acute lung injury cases in 33 states, 1 US Territory, and 6 deaths have occurred (3). Upon investigation, 80% of patients confirmed vaping with nicotine products, THC, and CBD products.

The precise mechanism of vaping induced lung injury has yet to be confirmed, but common clinical presentations have alluded to a few mechanisms. The pathophysiology behind vaping lung injury seems to have more to do with acute toxic lung injury, and less to do with active infection. Our case aligns with common manifestations of vaping induced lung injury, with patterns of pneumonitis including lipoid pneumonia, ARDS, and hypersensitivity pneumonitis. The department of health in various states issued a report finding “Dank Vape” to be the most common THC vape brand reported, with 59% use before symptoms appeared (4). This aligns with our patients’ substance use history. Patient symptoms range from shortness of breath and chest discomfort to acute airway damage, pulmonary parenchyma, alveolar edema, respiratory failure, and death (5).

The ingredients found in the liquid vaporizer possibly combined unregulated toxic contaminants and production of new agents seem to cause toxicity and damage. One possible etiology is found in the flavorants added to the liquid, specifically diacetyl and 2,3-pentanediol, which have been shown to change gene expression of cilia on the bronchial epithelium in the respiratory mucosa (5).  Heating of the liquid combination in the battery device has been shown to create harsh unknown compounds along with aeroziled metals like manganese and zinc, which can be toxic to lung cilia when inhaled (6). Research is on-going to see if there are contaminants or new agents that are causing the toxicity and lung injury.

Much more research needs to be done to conclude which compound(s) are the causes of injury, and to prevent the severity of symptoms from vaping lung injuries. According to the New England Journal of Medicine, 72% of hospitalized patients were seen in an outpatient setting (urgent care, primary care physician) before presenting to the emergency department (ED). Median time of presentation to ED was 6 days after onset of symptoms when looking at all ED visits from January 1, 2018 to  August 15, 2019 in Illinois ages 14-30 (5). With more awareness of the typical clinical presentation, demographics, substance use history, and social history, physicians can be more aware of this new emerging etiology of lung injury.

E-cigarette use has been linked to illicit drug use, mental health issues, and impulsivity in young adults, with significant associations with anxiety, ADHD, and PTSD (7). With a known history of psychiatric and substance use history, physicians should include asking questions about vaping use for an adequate assessment. Also, given e-cigarette use, clinicians may then screen for co-morbid psychiatric issues and help guide patients to address these conditions. Anxiety appears to contribute to increased e-cigarette use (8). With appropriate treatment of anxiety, there may be future reduction in addictive and risky behaviors.

Actions have been implemented to raise national awareness of the harmful effects of vaping. Physicians need to work with patients, especially the adolescent population, to discourage and warn against its use. 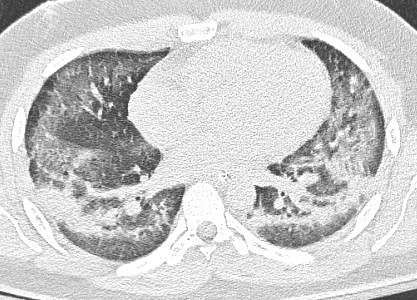