Angiotensin II: A new tool in the management of refractory antihypertensive overdose

A 50-year-old man with a history of hypertension, hyperlipidemia, borderline diabetes and depression was brought into the local Emergency Department (ED) after a reported overdose of his antihypertensive agents. His wife found him unresponsive on the ground with a suicide note. He was surrounded by empty bottles of his antihypertensive medications: metoprolol, amlodipine, and enalapril. The bottles indicated that they were last refilled 15 days ago for a 30-day supply. Upon arrival he was bradycardic, hypotensive, and unresponsive. His initial vital signs were Temp 98 °F, Pulse 45, BP 81/45 (MAP 57 mmHg), RR 16, and SpO2 98% on RA. His exam was significant for bradycardia and warm extremities with bounding pulses. He was intubated with only ketamine and resuscitation was initiated with a 1-liter normal saline bolus and infusions of both norepinephrine, at 20 mcg/min, and epinephrine, at 10 mcg/min. Hyperinsulinemia euglycemia (HIE) was also started early at 1 unit/kg/hr.

After 1 hour, he was still in the Emergency Department and despite adequate volume resuscitation and escalating the norepinephrine and epinephrine infusions, to 50 mcg/min each, and the HIE to 3 units/kg/hr, he remained bradycardic and his MAP was still below a goal of 65 mmHg.

What additional agent(s) can be considered in this patient? What has been shown to be efficacious for treatment of distributive shock?

Overdoses due to antihypertensive agents are common, with 108,614 exposures, and 326 deaths (170 from calcium channel blockers, 118 due to beta-blockers, and 38 from ACEi’s), reported to the National Poison Data System in 2017 (1). Patients can be profoundly toxic with agents that cause cardiotoxicity, vasodilation, or both (2). Multiple agent ingestions are even more difficult to manage due to synergy between different families of medications. There is much information published on beta-blocker and calcium channel overdoses. High dose vasopressors, and HIE have both been reported to successfully reverse hypotension due to antihypertensive overdoses (3), but some patients do not respond to even the highest doses of these treatments.

Overdoses of ACEi are typically mild and well tolerated (9, 10), however, there are reports of significant catecholamine resistant hypotension (11-13). It is believed that patients who are chronically on ACEi’s may be at increased risk for refractory hypotension, due to a deficiency in ANGII (8). Therefore, ANGII may be a valuable and efficacious adjunctive medication in refractory hypotension due an antihypertensive overdose, especially in people who are on, or have overdosed with, an ACEi (14, 15).

Human ANGII is FDA approved for all causes of distributive shock. Although the stage III clinical trial that led to its approval (ATHOS-3) primarily enrolled patients suffering from septic shock (16), ANGII has previously been used to successfully treat hypotension from ACEi overdoses (11-13). The exact mechanism by which ANGII increases blood pressure is yet to be elucidated, but it is likely related to vasoconstriction and improved catecholamine release (17), through the binding of ANGII to a G-protein-coupled ANGII type 1 receptor on vascular smooth muscle cells, causing smooth muscle contraction via stimulation of Ca(2+)/calmodulin-dependent phosphorylation of myosin (18).

ANGII is administered as an infusion, with a starting rate of 20 ng/kg/min. It can be titrated every 5 minutes at increments up to 15 ng/kg/min. The half-life of ANGII is only 1 minute, allowing for rapid titration and discontinuation. The maximum rate in the first three hours of treatment is 80 ng/kg/min, and the maximum maintenance dose is 40 ng/kg/min. After the goal blood pressure has been achieved, other vasopressors can be weaned off. When the patient begins to clinically improve, ANGII can be down titrated every 5 to 15 minutes in increments as high as 15 ng/kg/min (18).

There are no known contraindications to the use of ANGII, although it has not been evaluated in pediatric patients. The most significant adverse event associated with its use is the risk of developing an arterial or venous thrombosis or thromboembolism, most commonly a deep vein thrombosis. In the ATHOS-3 trial, 13% of patients administered ANGII developed a thrombus or thromboembolism compared to 5% of the patients in the control arm (16).  Therefore, thromboembolism prophylaxis should be considered in patients receiving ANGII. 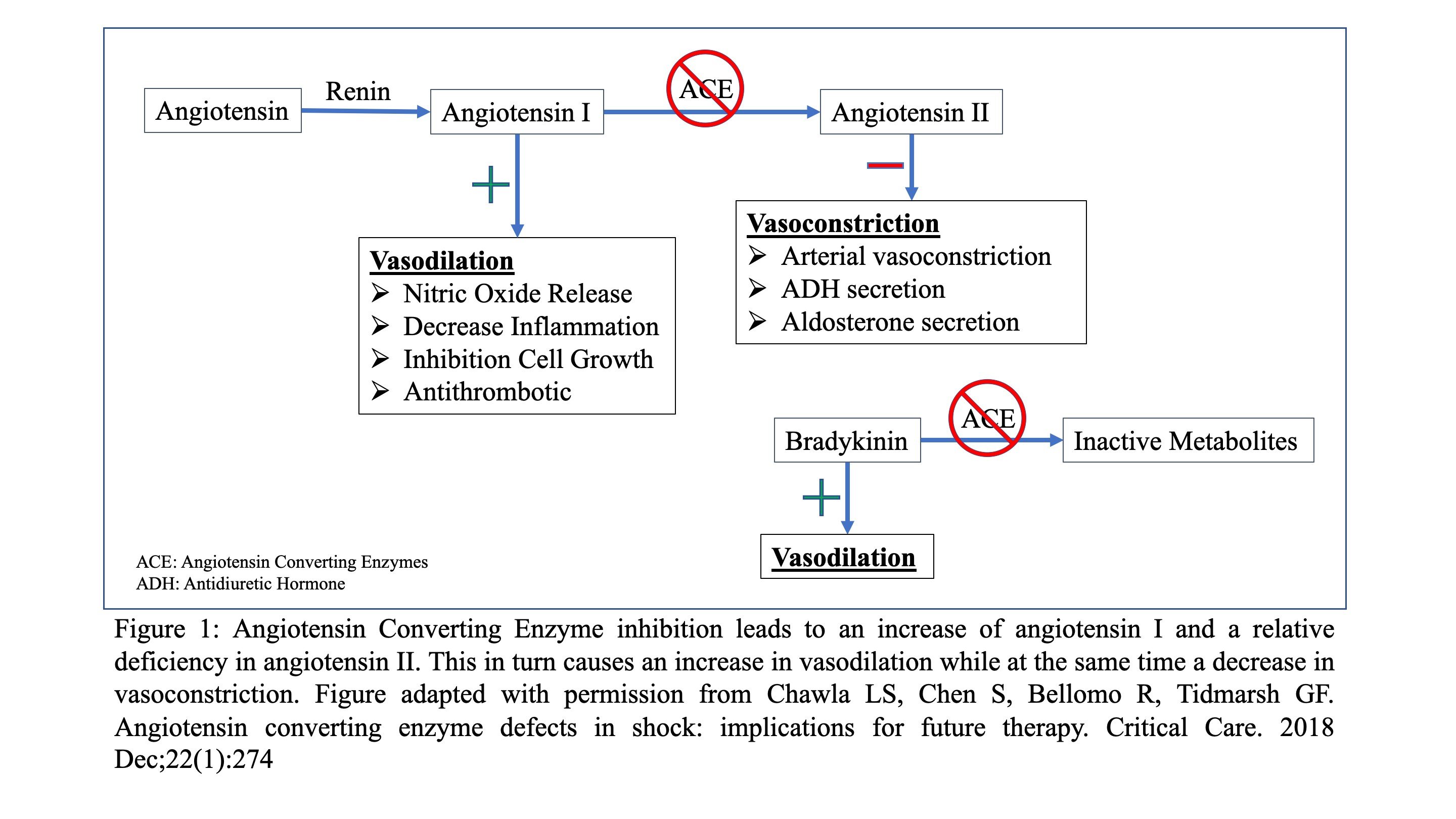