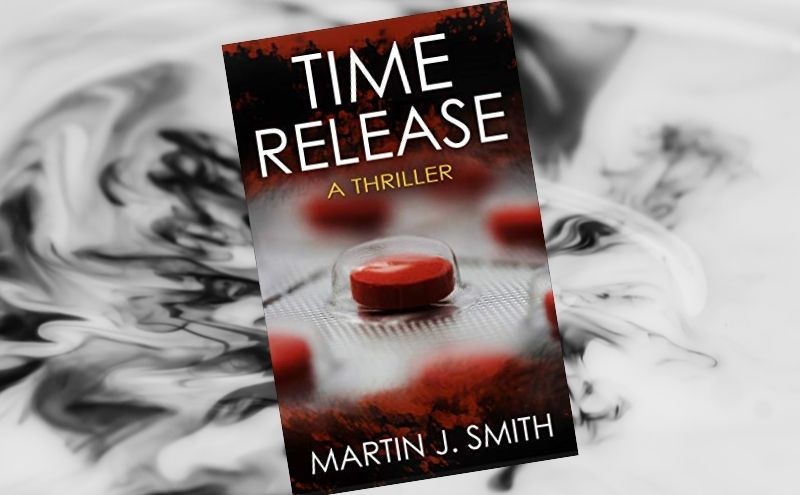 Since this review is being posted on Christmas Eve, I thought I’d give all of you an early Christmas/Hanukkah/Kwanzaa/Festivus present and introduce you to one of the best, if unknown, little books out there.

Way back in 1988 or 1989 I was traveling back from Asia and I found myself with a few hours to kill in one of the crappy little airports I often find myself in. So I wandered into the newsstand and there was one of those old-fashioned turnstile-type bookstands that sold comic books and paperbacks and creaked really loudly when it was spun around.

From that bookrack I picked up a copy of TIME RELEASE by Martin J. Smith and I think I finished the whole novel before my flight touched down back in the States. This is one of the most creative and imaginative and terrifying novels you will ever read.

It’s a crime/detective story involving a serial killer running around Pittsburgh murdering people but the really creepy, twisted, creative thing about this book is the killer’s modus operandi. Product tampering.

The author describes in explicit detail how his villain targets random strangers and kills them by sabotaging everyday items like breakfast cereal and yogurt and over-the-counter pain relievers, fresh fruit and shampoo with potassium cyanide, strychnine, battery acid and other poisons.

The detectives enlist the aid of a psychologist whose household eventually becomes a target for the killer, turning the simple act of taking a shower or brewing a cup of coffee into a cat-and-mouse game with a wrong decision possibly leading to death or other horrible consequences.

The battles of wits builds with a sense of dread and impending horror at how the inventive killer will poison his victims and elude capture and how the psychologist and the detectives and other good guys will unravel the killers identity and location before many more innocent people are injured or killed by this unusual and brilliant psychopath.

It’s a crackling good story and the author clearly knows Pittsburgh - its unique neighborhoods and personality of the various ethnic enclaves - and that setting lends a sense of realism and immediacy to the narrative.

TIME RELEASE gets an A+ for effort and an A for scientific accuracy - the author really did his homework with getting the detailed explanations of the poisons and their effects correct. And you don’t have to go to an airport in Manila to get TIME RELEASE - it’s available on Amazon. Martin J. Smith has published several novels and I’ve read two of them but neither is as good as TIME RELEASE. Merry Christmas!