A 5 year old boy with no significant past medical history presents with his mother to the Emergency Department after a berry ingestion. The patient was outside in his neighborhood when he came to his mother with a handful of red berries stating:

The mother quickly searched the berries on Google and was horrified by what she read. She immediately called EMS. En route, the patient mentioned to his mother that he “only ate one or two and didn’t eat the middle part.”

On arrival to the Emergency Department, the patient’s vital signs were HR 101, BP 102/71, RR 20, SpO2 98% on room air. The patient was alert, calm and cooperative. Lungs were clear bilaterally. Heart sounds were regular in rate and rhythm. Abdomen was soft and non-tender. He was moving all extremities and acting appropriate to his age. He had no rash or wound.

An electrocardiogram (EKG) was performed that showed normal sinus rhythm with a rate of 104 QRS 84 ms and QTc 454 ms.

The medical toxicology service was consulted for further recommendations for yew berry ingestion.

“Gall of goat, and slips of yew; slivered in the moon’s eclipse” – Third Witch brewing her poison, Macbeth

The yew tree (Taxus spp.) is a general name for a genus of 13 species of coniferous, evergreen trees and shrubs that can be found all over the world [1]. The shrubs tend to grow up to a height of 5 feet and are ubiquitous around houses, entryways, and paths. Yew trees can grow up to 120 feet with diameters of up to 4 meters and have a reddish bark. Both the shrub and tree have flat green leaves and seed cones that develop into a berry-like structure called an aril with a central seed (Figures 1A-1C). The tree has a rich history in mythology, literature, and religion and was well known to Julius Caesar, Shakespeare, and the Anglican and Catholic Church as a poison [2]. 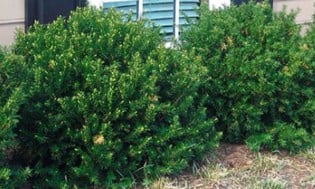 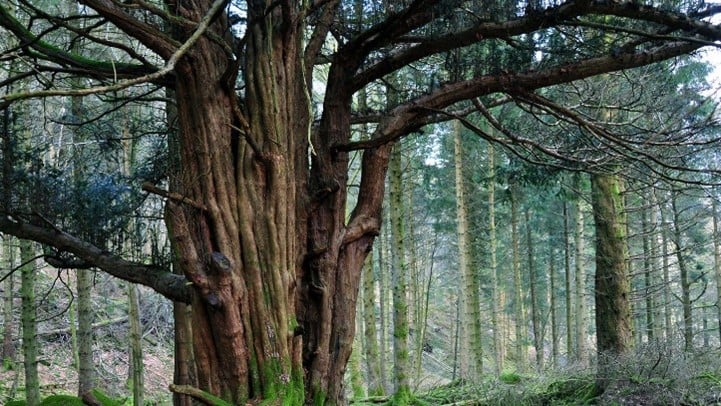 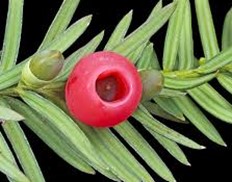 The toxic effects of the yew tree have been attributed to the presence of taxine alkaloids, which are present in all parts of the plant except for the aril [3, 4]. The two major groups of alkaloids that have been isolated are called Taxine A and Taxine B. Taxine A accounts for 1.3% of the isolated alkaloid composition, while Taxine B accounts for 30%. Taxine B has been shown to be more potent than Taxine A in animal models, and is thought to be the primary culprit in yew tree toxicity.  Taxines A and B act as both calcium channel and sodium channel antagonists. Taxine B, in particular, has been shown to increase atrioventricular (AV) conduction time, prolong QRS duration, and dampen myocardial contractility. These compounds act directly on cardiac myocytes as their effects are not able to be reversed with atropine or vagotomy in animal models [4].

Figure 2A: Structure of Taxine A (Wilson et al.)

Figure 2B: Structure of Taxine B (Wilson et al.)

The minimal lethal dose in humans of the yew plant is 0.6-1.3 g/kg, which equates to 3.0-6.5 mg/kg of taxine assuming 5 mg of taxine per gram of yew. Clinical effects include nausea, vomiting, and abdominal pain initially, but can progress to bradycardia, AV block, hypotension, ventricular fibrillation, ventricular tachycardia and cardiac arrest [5]. Ingestion is generally either from accidental ingestion, often by curious children, or by deliberate self-harm attempts. Accidental ingestions are much more common and usually do not lead to significant toxicity, while deliberate ingestions of large quantities of yew – while rare – have proven fatal [5, 6].

Many different treatments have been tried for yew toxicity. Physicians in the 1800s administered pro-emetics and applied leeches in cases of yew toxicity without much success [7, 8]. In modern times, clinicians have attempted to treat toxicity with atropine, amiodarone, lidocaine, sodium bicarbonate, digixon immune fab, and hemodialysis though none of these treatments appear to show a clear benefit [5]. Extracorporeal life support (ELCS/ECMO), however, does appear promising in case reports and may be a lifeline in severe ingestions [5, 9].

Last, the yew tree has played a significant role in modern therapeutics. In the 1970s, paclitaxel was isolated from the bark of the Pacific yew tree and later, docetaxel was isolated from the bark of the European yew tree. These compounds suppress inhibit mitosis by suppressing microtubule formation and are now a mainstay of treatment for cancers of the breast, ovary and lung. They are deemed “Essential Medicines” by the World Health Organization [3].

The patient was observed for six hours and monitored on telemetry. Prior to discharge, an EKG was performed that did not show any significant changes from the initial EKG. The patient was discharged in good condition and went home smiling and happy!