Tactical Medicine and Law Enforcement have a long and established relationship, and we seek to continually improve how we work as a team. While this partnership can take multiple forms, it continues to make a large impact every day. Both medical providers and law enforcement continue to evolve in many ways including: medical care during high-threat LE missions, mass casualty incidents, community critical crises, casualty care education, preventive care, tactical medical research, and other areas. The future appears bright in this emerging field, and one can expect the bond between law enforcement and medical providers who support them to continue to get stronger. The tripod of public safety includes LE, Fire, and EMS / medical. Together we can increase our cooperative interaction and ultimately improve our community response and save lives.

Whenever a large gathering of people occurs there is the potential for multiple casualties if an active assailant mass casualty incident should occur. Unfortunately, these incidents have occurred for over 100 years, and the risks are increasing. The medical response involves victims, bystanders, and a variety of first responders. The concept of Rescue Task Force (RTF) continues to evolve, and in addition, Tactical Medical Providers can respond in tandem with law enforcement officers to render medical care. They will have training, knowledge, equipment, and skill sets centered around establishing scene safety and then providing immediate lifesaving interventions; such as hemorrhage control, airway and breathing support, and ultimately extraction and casualty evacuation away from the threat area to hospitals.

Unfortunately, large active assailant mass casualty incidents are increasing in number, including active shooters, vehicle assaults, knife attacks, and explosive/incendiary events. Many tactical medicine providers seek to counter this rise in violence, and the field continues to grow in the medical world. There are tragic daily events and applications of tactical medicine throughout the world, and below is a short list highlighting some of the more well-known incidents:

Significant Active Assailant MCIs that have occurred in the USA:

Note that many others have occurred worldwide, this is a list of some of the larger incidents. Hopefully, the future will see less of these tragic events, and in the meanwhile, we must prepare to respond as a community as optimally and safely as possible.

There are many potential uses of robots in a tactical law enforcement response. In this particular tactical team activation, in a midwestern town in late November with freezing temperatures, several suspects who were selling illegal drugs were thought to be inside a house, and a shooting occurred nearby, and one suspect was observed whoran into the house. It was a known'drug house'. The occupants failed to respond to police requests to surrender and walk out, and so the situation developed into a barricaded suspect high threat incident. An uncertain number of persons inside. The threat matrix used resulted in the activation of the city's SWAT / tactical team and TEMSelement and also negotiators and the bomb squad who brought their equipment including theirrobot. Warrants were obtained.

Over the course of several hours, police negotiators used loudspeakers to try to talk the suspects into walking out with their hands in the air, and surrender. No success. Decisions were made to deploy the robot to deliver a telephone to the house, with hopes that direct contact via telephone with negotiators would be more successful. These photographs show the robot being utilized. The robot was escorted approximately 150 yards down an alley to the house, where tactical officers had surrounded and contained the inner perimeter. A phone was delivered to the door of the house and one suspect stepped out to get the phone. Communication was effective.

After talking with negotiators, the suspects inside eventually surrendered and walked outside one at a time, hands raised in the air, and laid down on the ground, and subsequently, three suspects were taken into custody. The house was thoroughly searched by the tactical team, with close up support by the TEMSelement (2 physicians, 1 nurse, 1 paramedic) who remained within a 30 second response time behind hard cover. The site was secured, and detectives/investigators completed searching the building and nearby area. Drugs and several pistols were found. Successful prosecution of the suspects resulted. Law enforcement robot being prepared to be deployed. This photo was taken from the robot control screen. The 2-tactical officers are escorting the robot down the alley to the back of the house where the suspect(s) were located. Photo was taken from the robot control screen, of one suspect proned out, being taken into custody. Multiple other tactical officers are providing cover of windows and other high threat areas.

Other suspects listened to police commands and slowly exit the building and were taken into custody, while other team members prepared to search the house slowly and carefully. Video cameras and mirrors were used extensively. 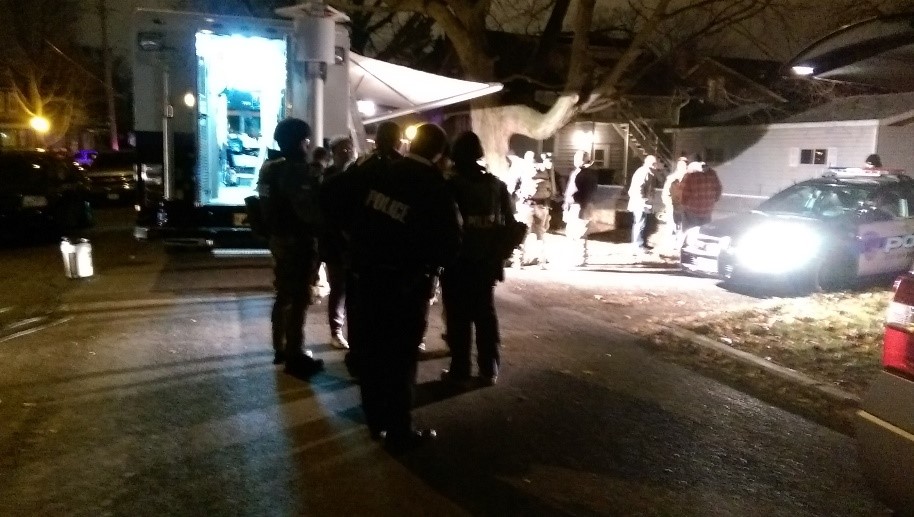 Mission completion, accounting for all personnel and gear, followed by a debriefing (later at police department), and learning what went right and how to do it even better next time. TEMS support was maintained until all teams were cleared from the callout site. No injuries or medical issues arose from this deployment. Mission successful. Effective use of tactical officers, robotic and telecommunications equipment, and goodnegotiations and effectiveleadership and tactics combined to resolve the crisis. This is a real-world tactical team callout, involving a SWAT team in the Midwest, deployed to help capture a murder suspect who was hiding in the woods, after shooting at sheriff deputies and U.S. Marshall’s officers with an AK-47. At this time, the suspect was about 1 mile away, after sunset, where he had shot at responding officers. Nighttime cold weather, rural location, limited radio communications. The suspect engaged the team and was neutralized. No other casualties. Photo by Dr. John Wipfler. This training scenario involves realistic moulage and application of an improvised tourniquet, chest needle decompression (GSW to chest, tension pneumothorax), and placement of a one-way Asherman chest seal over the decompression 14 gauge devise. A commercially made tourniquet for extremity trauma is faster and better (when available), but all tactical medicine providers and LEOs must have the skill sets and knowledge of using improvised materials when providing tactical emergency medicine in austere environments. Photo by Dr. John Wipfler. This realistic scenario-based training involves TECC (tactical emergency casualty care) for a downed suspect. After shooting at officers, he was neutralized, secured, cuffed, searched, and now the TMP (tactical medical provider) is performing a tactical patient assessment. Treatment of a GSW to the chest is limited in the field, and rapid extraction and casualty evacuation/transport is the critical next step. This is a load and go situation, and an accompanying armed officer will go in the vehicle with this suspect and the TMP(s) to the most appropriate hospital. Photo by Dr. John Wipfler. In this realistic training scenario, an innocent hostage was shot by the suspect, and Tactical Medical Providers (TMPs) have ensured the scene is safe, and are now evaluating the patient and providing life-saving medical care, to be followed by rapid extraction and transportation to an appropriate trauma center. PPE (personal protection equipment) is an important consideration for all at this scene and during transport. Photo by Dr. Keegan Bradley. Realistic scenario-based training should include stress-inducing artificial blood, sounds, smells, and chaos that may include smoke, limited sensory environments, sirens, screaming, and other factors that will enhance the training experience. The goal: improve the ability of responders to think and act calmly, effectively, and decisively in the midst of complete chaos and mayhem as a casualty (who may be a close friend /SWAT officer/teammate) lays on the floor with life-threatening injuries. Photo by Dr. Lawrence Heiskell. In this training photo, a tactical team and TMPs are carrying a casualty from a Bearcat armored vehicle to a nearby medevac helicopter. All involved should be familiar with the policies and procedures to interface with EMS, including air medical assets/teams. The bottom line here: do not approach close to the helicopter unless accompanied and directed by a flight crew team member. Listen to and follow their directions. Safety is always number one. Photo by Dr. Lawrence Heiskell. This training involves an ACEP-sponsored CONTOMS course, where the U.S. Park Police helicopter is interfacing with the CONTOMS students, who have taken a casualty from the armored vehicle and, under the careful direction of a flight crew member, are now loading the casualty into the helicopter. Many key factors need to be taken into consideration when calling for and interacting with an air medical helicopter and crew. Training is key. Photo by ACEP EMS Rick Murray, EMT-P. How can I get involved in Tactical Medicine?