Tactical medical providers (TMPs) must have a strong foundation of firearms expertise and be competent in handling all weapons used by their SWAT team.  At a minimum, the skill set should include the five-firearm safety rules and being capable of handling and making safe a wide variety of weapons including pistols, submachine guns, rifles, shotguns, and less-lethal.  This includes removing weapons from a downed officer (possibly in shock and with altered mental status) as well as properly searching and removing weapons of all types from criminal suspects or emotionally disturbed persons.

Some TMPs are unarmed, secondary to politics and policy. Other are sworn LEOs authorized to carry a pistol in the course of their duties, or civilians authorized by the team to carry for defensive purposes. Weapons carried by TMPs are primarily for self-defense, including defending the casualty in their care.  TMPs acquire firearms knowledge and skill through reading, instructional videos, training courses (often paid for out of their own pocket), police academies, and training with their team.  Many TMPs also hold concealed carry certification and are armed off-duty. In all circumstances, we must be able to handle weapons safely and skillfully.

In 1975 a company called Aimpoint invented the first electronic red dot sight.  A short time after, I convinced my father that this red dot sight would be great to mount on our family’s Ruger Mini-14. Indeed, it sped up the time to acquire a target and press the trigger with a proper sight picture.  Red dots sights are now used on a wide variety of platforms including rifles, shotguns, and recently, pistols.

Technology has allowed the electronics and lenses to shrink over time, and the modern shooter is blessed with a wealth of companies that produce reliable electronic sights. For simplicity, we will refer to them as micro red dot optics (MRDOs).  In reality, electronic sights come in multiple sizes, configurations, magnifications, and dot colors. This is also a curse, in a way. Since the shooter has so many choices, it is hard to figure out what to buy.

There are good and bad points with any weapon sight choice, and MRDOs are no different.  The weapon itself affects choice, and many manufacturers now offer pistols with a milled slide for mounting a MRDO. For more information, I refer you to several recent, well-written articles:

The internet is a good resource, as is picking the brains of your local LE agency or tactical team officers for suggestions.  Ideally, you should shoot pistols equipped with several different MRDOs to find what works well for you. Educate yourself.

Over the past 2 years, I have made the transition to MRDOs.  At age 58, I noticed that it was getting harder to clearly see a sharp front sight picture when shooting my Glock 34 (as well as other iron-sighted pistols).  The physical limitations of my eyes’ lenses became apparent with age, and this was affecting my accuracy.  I noticed about the same time that 2 or 3 of our SWAT officers (the better shots of the group) had acquired red dot sights on their pistols.  Towards the end of range-time, I would ask, “hey, how do you like your red dot on your pistol? Can I try shooting it?”.  Something consistent happened:  with each well-fired round, I hit the dead center of the target.  Better than my open-sighted Glock 34.  Mmmmmm.  Maybe I need to get one of these…

Fast forward to now.  I have acquired a new Gen 5 Glock 34, with M.O.S. (Modular Optic System), a Trijicon SRO (Specialized Reflex Optic), and a Streamlight TLR-1 HL  1000 lumen weapon-light. The Class 2 holster I chose is from Safariland and manufactured exactly for this pistol/site/light combo.  When holstered there is a folding plastic hood that covers the optic to protect it from rain, dust, and debris.  I still carry my old Glock 34 inside my vest for backup, running iron sights.  Both pistols use the same 17-round Glock magazine with 2 round extensions.

The decision to mount a flashlight on your pistol is based on the likely scenarios in which the weapon may be needed. For concealed carry, I do not mount a weapon-light, instead carrying a separate flashlight in my left pocket.  For tactical medicine operational deployment, I recommend that TMPs use a bright weapon-light and consider using the larger light and laser combination. Lasers can enhance hit probability in scenarios where the TMP may be moving a casualty and unable to acquire an adequate sight picture. Another advantage of a weapon-light is the increased weight below the barrel helps decrease muzzle flip, allowing more rapid time to get the sights back on target or acquire a new target.

How does my new Glock shoot?  Fabulous.  Shooting from a rest, I can strike a 5-inch target with 7 out of 8 shots at 100 yards.  A 1.5-inch group at 25 yards is easy-peasy.  Wherever the red dot is located when the pistol fires is exactly where the bullet goes. With proper trigger squeeze and shooting stance, I can run the gun faster and more accurately than any pistol I have shot.

The beauty of this system is that you no longer need to “line up” the front and back sights.  Instead, your shooting mindset is “note the threat; decide if it is a shoot or no-shoot scenario; move the pistol until the dot is on target; squeeze the trigger.” The key advantage is: you KEEP YOUR EYES FOCUSED ON THE THREAT.  A few other advantages:

Just the other week, it was 95 degrees outside with 95 percent humidity.  I had my Glock 34 with the SRO MRDO inside my house, with the air conditioner set at 74 degrees. I strapped on my gun belt and walked out to the shooting range (yes, I live in the country, and can shoot where I live).  After making sure the range was safe, I loaded up and prepared to engage my targets.  Something was wrong.  My sight was fuzzy white, and I could not see the red dot. What was the problem?  Condensation. The cold glass optics, in the humid warm weather, developed a layer of condensation that obscured the dot.  My answer to the problem:  I used my shirt (clean, cotton) to quickly wipe off the moisture with a quick 2 second motion, and then fired, accurately striking the target. Of note, in a gunfight that two-second delay could mean you are dead. My experienced colleague Dr. Brian Springer suggests the following: use an anti-fog spray like Cat Crap, available on Amazon. Practice alternative sighting methods such as guillotine and shoulder framing, that use the outline of the optic itself to create a rough sight picture. Do yourself a favor and take a reputable pistol-mounted optics class that addresses these concerns.

I have not fired in the rain yet, but modern MRDOs really are not affected much by water. My sight was covered with small water droplets after I wiped off the aforementioned condensation.  I could still easily see the red dot, and I shot accurately.

MRDOs are not cheap; most will set you back anywhere from 230 to 580 dollars. A bit pricey, but then again, what is your life worth? Batteries are generally inexpensive but are still needed and should be routinely replaced. MRDOs also increase the size of your pistol, which can be an issue for concealed carry.

The MRDO is here to stay. Professional shooters have been winning competitions with them for years. Military special operations equip their operators with MRDOs, where they provide a significant advantage in CQB. Tactical and patrol officers are increasingly carrying them as well. Will County Sheriff’s Office in Illinois recently equipped their deputies with Glock pistols and Trijicon SROs, which has greatly improved their accuracy.

The shooter who gets the first rounds on target usually wins the fight. MRDOs facilitate that goal.  For me, the improvements in my speed and accuracy are significant. I highly recommend that you check these out for yourself. Get expert assistance. Do not pinch pennies, as you get what you pay for.  Again, what is your life worth?  Put some of your money into an effective shooting system that will give you a decisive advantage. Oh, and please do not forget to get a nice gift for your spouse or significant other after you acquire that expensive MRDO.  You need to keep things smooth in the household and the Homefront.

Photo 1:  View in the unmagnified Trijicon SRO, 3.5 min red dot, with a faint green dot seen at the tip of the front sight.  That is a tritium insert used for seeing the front sight in low-light conditions.

Photo 2 – Closer view; note that the rear sight is blurry, while the red dot and target (door, 12 feet away) are clearly in focus.  The green tritium-tipped front sight is slightly blurry.  A key advantage of MRDOs is allowing the shooter to maintain focus on the target, without needing to transition focus back to the front sight before shooting. Improved speed and accuracy is the result. 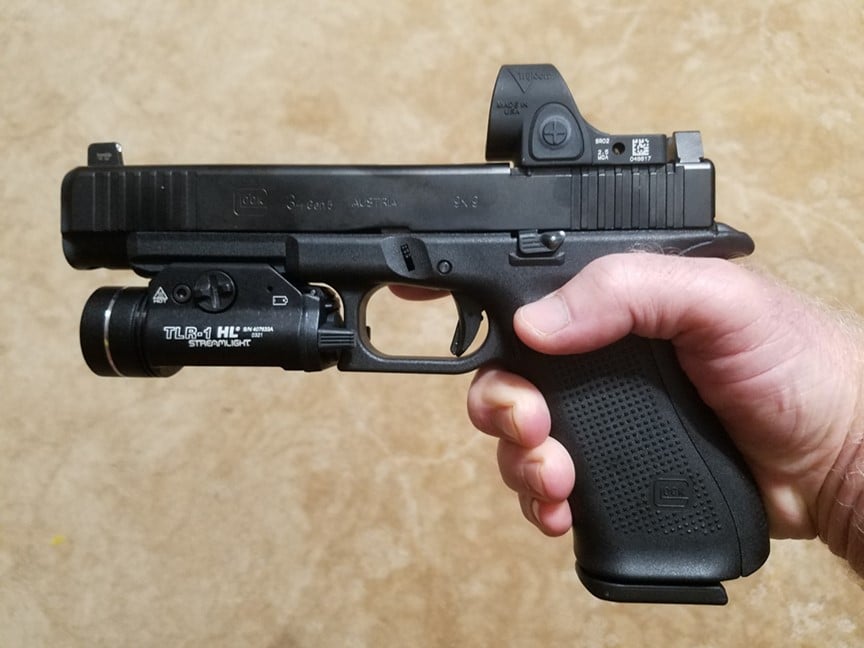 Photo 3 – Prepare for winning a gunfight.  Flashlight is 1000 lumens and MRDO is the Trijicon SRO.  Pistol is the Glock 34, Gen 5, 9mm semiauto pistol as described in the article.  What is your choice going to be?  There are a tremendous number of high-quality pistols to choose from, and a wide variety of MRDOs. Get educated and choose wisely. Get a good holster, use high quality ammo, and practice.  Stay ready. 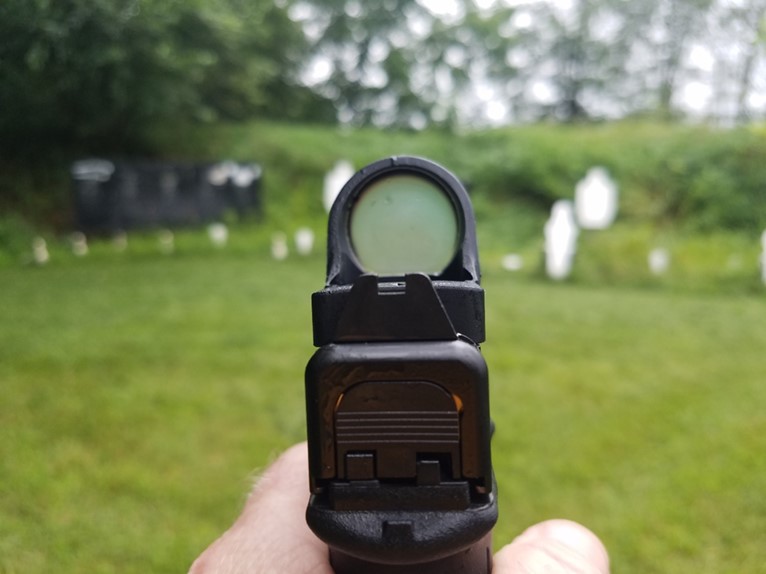 Photo 4 – One disadvantage of a MRDO is sudden exposure of a ‘cold’ or cool pistol and sights (as in an air-conditioned building or vehicle) to a warm, humid environment.  This occurred to author’s pistol in about 30 seconds. It was easily wiped off in 2 seconds and allowed accurate shooting.  Use tricks to minimize condensation, be prepared to wipe your sight if time allows, and practice alternate methods for aligning the pistol in the above circumstances. 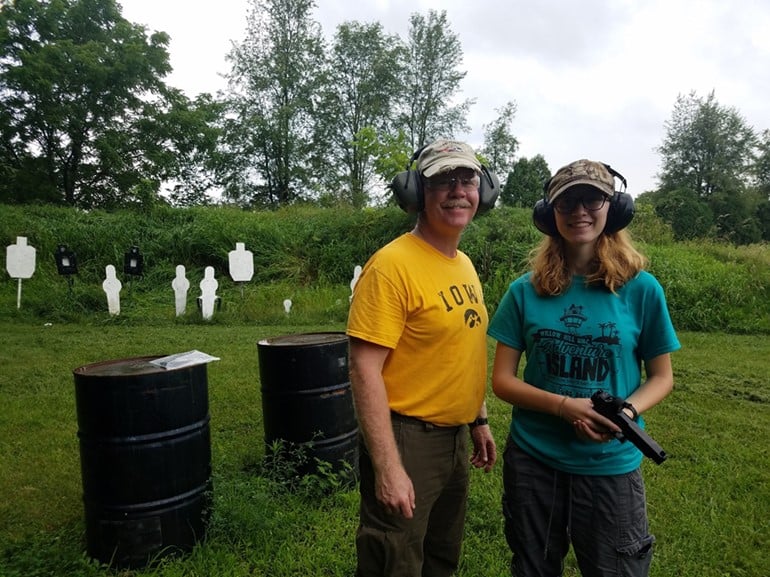 Photo 5 – An enjoyable afternoon at the range with daughter Libby.  She is a natural pistol shot.  In a full-sized fighting pistol, the 9mm +P jacketed hollow point ammunition is very controllable for most shooters and is an excellent defensive round. 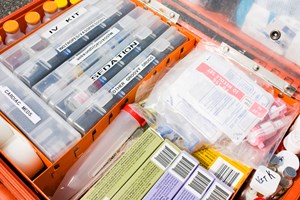 TEMS Section Update from the Chair