This is the first of a series of newsletter articles focusing on International TacMed efforts and programs.

History and Development of the Ibero-American Committee in Tactical and Operational Medicine - CIMATO.org

The experiences of war time combat medical care in World War II, Korea and Vietnam, together with a growing understanding of field care, rapid evacuation, transportation and the definitive treatment of those injured in combat, are the historical basis of  the tactical combat casualty care TCCC program.

In the 1990s the need to redesign care to trauma in the tactical environment was widely recognized. The Tactical Combat Casualty Care (TCCC) project began in the Naval Special Warfare Command in 1993, and was subsequently continued by the US Special Operations Command (USSOCOM). A standardized set of tactically appropriate combat trauma care protocols that were published as a supplement in Military Medicine in 1996. The TCCC guidelines provided medical doctors and paramedics with combat trauma management strategies, these were later implemented inside Latin American military medical commands. Later in an effort to translate these military experiences into the civilian environment the Committee on Tactical Emergency Casualty Care is formed (C-TECC)

In the late 1990s and early 2000s, several contemporaneous Tactical Medical efforts were developed in various Latin American countries. In Mexico, particularly in the Mexican Army, in October 2008, and with the full support of the Division General D.E.M. Salvador Cienfuegos Zepeda and General Brigadier M.C. Miguel Ahumada Rodríguez, Lt Col Perez Bolde with a group of chiefs, officers and troops of the Mexican health service as well as civil instructors, teach the first course of Tactical Medical Care, in which the protocols of tactical medicine and military medicine were instructed, integrating also modules of vertical rescue, water rescue as well as aero-medical evacuation.

In May 2015, in the City of Bogotá Colombia, the Latin American Committee of Tactical Medicine (CoTCCCLat) is formed, with the participation of Mexico, Colombia and the USA, subsequently annexing Costa Rica, Chile, Bolivia, and Ecuador.

In December 2017, the Ibero-American Committee of Tactical and Operational Medicine (CIMATO in Spanish) is formed participating at the  CTECC meeting in Rancho Cucamonga USA. Later in May 2018 in Charlotte North Carolina, during the COMMITTEE TACTICAL EMERGENCY CASUALTY CARE meeting at SOMA, CIAMTO presents the work done in Latin America formalizes the Committee board made up of: Dr. Luis Alfredo PEREZ BOLDE President, Dr. Amado Alejandro Baez Civil Vice President, Ramon Reyes Military Vice President, TODD SOARD EDUCATION PROGRAM, CHRISTIAN GORING Education Director, as well regional and country representatives from twelve different nations. In November 2018, the First Congress of Tactical Medicine is organized for the first time in the city of Leon Guanajuato, which is held under the direction of CIAMTO with more than 200 participants attending from more than twenty different agencies.

In the Ibero-American Committee of Tactical and Operational Medicine, it seeks to participate in the Ibero-American and international development from the development of teaching, scientific, humanistic and technological research activities and the extension, preservation and dissemination of knowledge regarding the Tactical and Operational Medicine as well as in Austere environments.

“To be leaders in Education and training of human resources in Educational and Operational Processes of Tactical Medicine and Operational Medicine at the Ibero-American and international level, always based on scientific knowledge, so that quality care can be provided, safeguarding the health and integrity of the individual. through ethical techniques and values that privilege human dignity. "

“Proactively influencing technology-supported, and based on scientific processes, and in close collaboration with other professionals. To be able to create and disseminate knowledge of the highest professional, ethical and scientific level, which will allow them to develop the processes of tactical and operational medicine." 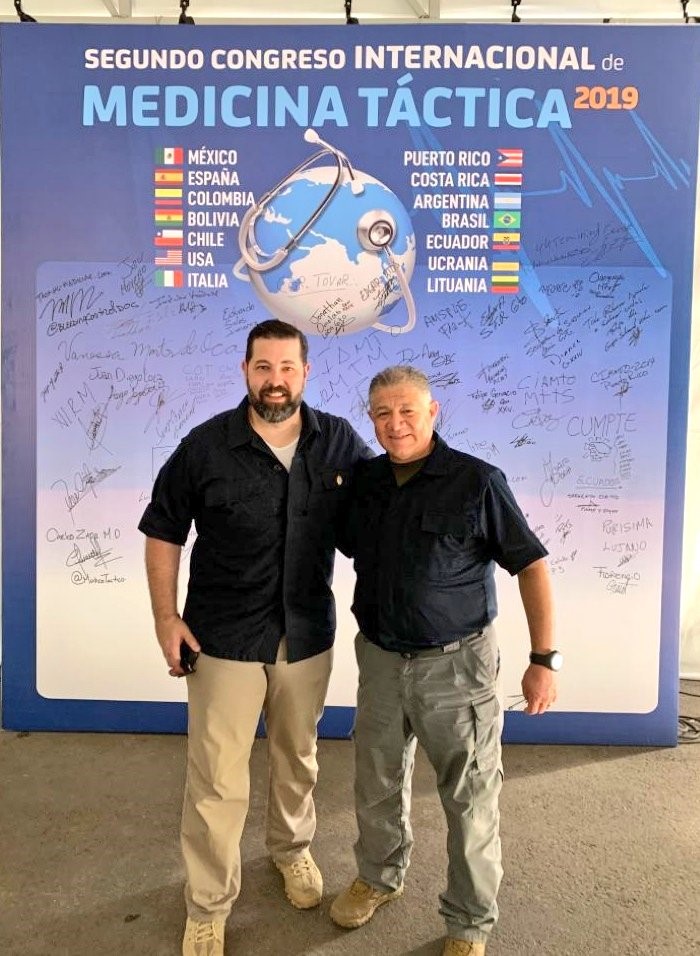 Drs Baez and Perez Bolde at the 2019 CIMATO International Congress in Guanajuato Mexico.

Images of the CIMATO 2018 and 2019 Annual International Conference

Picture courtesy of Mr. Harold Montgomery, taken from the meeting minutes of the CoTCCC in San Antonio, TX Feb 2019.