3rd Place Emage Winner: 3 AM Not Another Teenager Transferred for Persistent Vomiting: Not What You Expected

A 16-year-old healthy boy was transferred to the pediatric emergency department (PED) for 48 hours of vomiting. The patient had vomited a total of 40 times; emesis was yellow. There was no history of diarrhea, fever, or abdominal pain. Emesis was non-bloody. The patient denies fever, abdominal pain, constipation, and states passing gas today.

No history of migraines existed, and there were no headaches with this illness. The rest of the review of systems (ROS) was noncontributory.

The surgical and medical past medical history (PMH) was unremarkable.

At referral, intravenous (IV) resuscitation was initiated with labs and computed tomography (CT) scan was obtained.

The patient was referred for persistent vomiting and abnormal results.

Findings: There is extensive pneumomediastinum with air dissecting along the esophagus, mediastinum, and supraclavicular soft tissues, along the lateral chest wall bilaterally, greater on the right.

No definite pneumothorax is visualized. 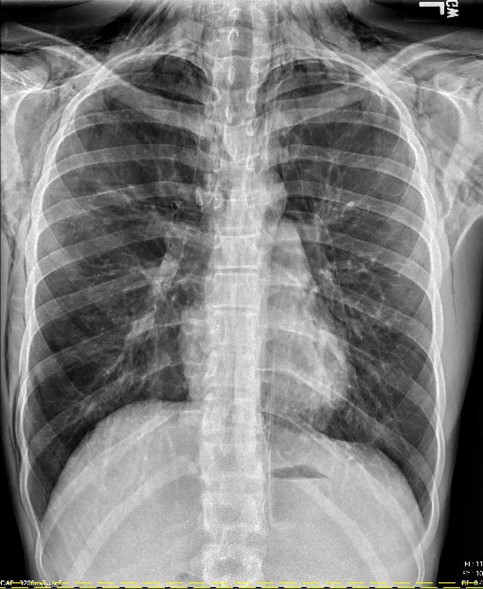 There is no focal consolidation. There is no pleural effusion. The heart size is normal. The bones are unremarkable.

***The differential expanded even further after reviewing the outside CT scan with radiology. YouTube link for the initial CT scan is available at https://youtu.be/jG0J2b3EhhU.

Extensive air surrounded the esophagus and within the mediastinum, with dissecting along soft tissue planes, as described, suggestive of an esophageal perforation.

There is no free air in the abdomen. There is dilated stomach and proximal duodenum, with narrowing of the duodenum as it crosses the superior mesenteric artery (SMA). This can be seen with SMA syndrome in the proper clinical setting. 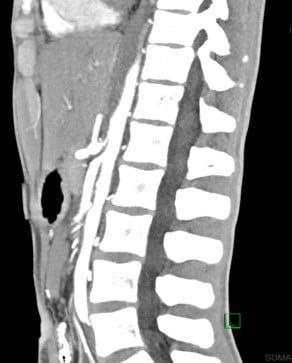 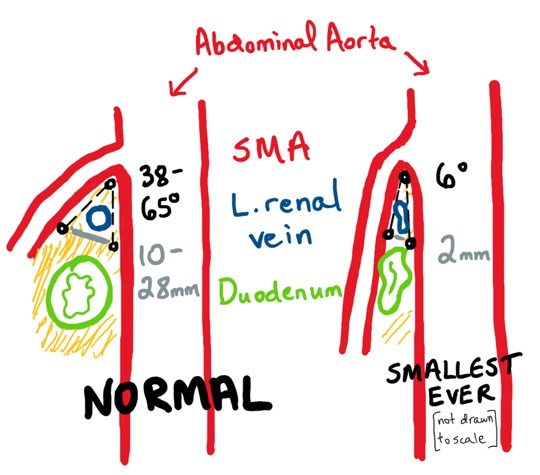 **The patient may get relief by lying prone in the left lateral decubitus or in a knee-chest position.

Surgical (if chronic or persistent)

The etiology was concerning for SMA syndrome. The patient was admitted to the Surgery Service post-operatively and kept NPO with NGT in place and total parenteral nutrition (TPN) started for nutrition. An upper gastrointestinal series (UGI)/esophagram was completed after one week of bowel rest showed no esophageal extravasation or duodenal obstruction. His bowel function returned, and he tolerated slowly advancing his diet. His CXR improved and CT was removed. A CTA completed confirmed the diagnosis of SMA syndrome (14-degree angle between aorta and SMA and 6 mm distance between vessel and duodenum). Non-surgical management of SMA syndrome was recommended given this was the first episode that the patient experienced, and surgery has variable results. Nutrition was consulted for a weight gain diet. By the day of discharge, the patient was tolerating a regular diet, afebrile >24 hours, and pain was controlled. The patient was discharged home in good condition with ~5lb weight gain.