From the beginning of the outbreaks reported in the province of China, the behavior of the disease caused by the new SARS-CoV-2 coronavirus was closely followed and when the world panorama realized that it would become a pandemic, a pertinent planning began to organize the management of the disease upon its arrival in Mexico.

Planning the operation in the three levels of care, prevention measures, considerations for social isolation, watching for the economic impact on the population, planning for peak moments and for the moment when the lack of beds both in normal hospitalization and in the units critical care would be evident, hospital reconversion, and planning of provisional hospitals.

Mexico has a very well-structured epidemiological surveillance system, so an adequate follow-up has been given to all cases that have arisen in the country with its different branches of surveillance. This surveillance is carried out at all levels of care, so training sessions were started for all health personnel so that they had the knowledge for the proper diagnosis, identification of serious symptoms and their correct reference to second-level centers, or highly specialized centers for timely treatment.

In all units of any level of care, there is a designated respiratory triage module to identify suspected Covid-19 patients and establish their priority of care in special areas of all hospital reconversion processes.

What was the problem? That despite the fact that in theory the government initiated efforts from the beginning of the pandemic, the actions seem to have come late. Many of us compare this situation to the fable of the famous wolf, where the threats were ignored and finally we have his snouts on our necks, slowly squeezing only to make us feel short of breath, but not to kill us.

We have a lot of stories in Mexico with people who left the country for various reasons in early March, and upon returning, with the emergency already established in several Latin American countries, we did not find airport filters to monitor that one did not enter the country with signs or symptoms of Covid-19. We saw how many countries closed their entry and exit routes, guarded the doors, began their quarantine processes, and we were still waiting for government decisions, which may have been late. Our social distancing program officially began on March 23, 2020. A process of voluntary social distancing, without official oversight, relying on the social response that, as in any Latin American country, has not been what was expected and has led to an increase in the number of cases in an exponential form.

Mexico has held a health system with deficiencies in its entire environment for many years, so working only with existing limited resources is not new to us. We already had 11 years ago to face a pandemic and we were the center of attention of the world, fortunately it had a favorable resolution with a timely intervention; in theory because of this background, we should have had a better response this time.

What has been revealed? The great disorganization of the health organizations in this country, where central guidelines are developed, but each hospital unit works differently and at its own pace, without the support of its authorities because they have their hands tied to the authorized budgets. The great deficit of specialists in critical areas was exposed. And the lack of support from other specialists in the face of imminent chaos. Emergency medicine in Mexico has more than 30 years of existence, however, we still have an impressive deficit of specialists in emergency medicine that will take several more years to be filled in. Today we have emergency areas with few qualified personnel, either by colleagues who already have a medical license for being infected with Covid-19 or for being at-risk personnel. We have new hires in the emergency services, most of them general practicioners with no experience at hospital level, which makes the express training process that is necessary for them more difficult.

We have been provided with the right personal protective equipment, but not of the best quality, most of us have had to invest part of our salary to acquire better quality equipment. We have taken the phrase “in pandemic there are no emergencies” as law, to guard against an invisible but dangerous enemy. The paved road that we have been walking has left wounds in our souls, we have lost co-workers and friends, we have seen people die without meaning, we have seen irresponsibility and we have seen devotion.

We are at the forefront of the battle; we are the first line and sometimes it seems that the only one. What we see in the emergency rooms is far from the official reports and we must be cautious with what we observe. There is insufficient tests, so the reported confirmed cases are limited to patients with moderate or severe disease that warrant hospitalization, but most outpatient cases do not have a test that confirms the diagnosis and remains a suspicious case.

We work for the society, for the benefit of people we do not know and yet another phenomenon that has been seen are attacks on health personnel, as simple as threats to remove them from the buildings where they live or as serious as physical attacks by people who do not have the interest to read and inform themselves adequately and believe that we are all the time carriers of the virus that causes Covid-19. So far, nearly 40 “isolated cases” have been reported with physical assaults, not just verbal ones in 26 states of the country. Among the recommendations that have been made to health personnel, is not to go out into the streets with uniforms or with emblems that show that we are health workers.

We continue in this fight holding hands and working as a team, taking all the necessary precautions to emerge victorious. At the end of the road this will leave us a broad learning, not only in the management of a pandemic, but in the essence of the human being, its social functioning and the true personality of a team. Let us always remember: "We do not want heroes; we want healthy doctors to continue on this path." 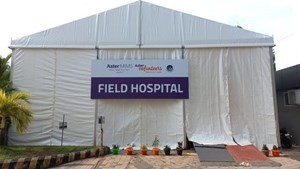 Emergency Medicine Innovation and Incubation in the West and the East