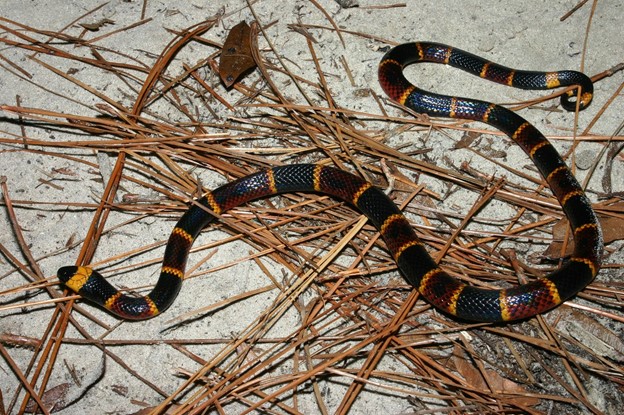 A 63-year-old male presented to the emergency department via EMS 1 hour after sustaining a bite from the eastern coral snake, Micrurus fulvius. The patient had found the snake in his backyard, and he sustained the bite to his right middle finger while handling the snake in an attempt to remove it from his yard. On arrival to the ED, the patient reported mild swelling to the distal right middle finger and pain in the finger radiating to his shoulder along with the sensation of muscle stiffness and tingling in the hand.

On arrival, his vital signs were a temperature of 37 degrees Celsius, heart rate of 80 beats per minute, blood pressure of 165/95 mm Hg, respiratory rate of 16 breaths per minute, and oxygen saturation of 99% on room air. His physical examination was notable for a superficial bite mark with a small amount of dried blood on the flexor surface of the right middle finger distal phalynx with associated mild swelling and a capillary refill of less than 2 seconds. His right hand demonstrated full range of motion and 5/5 strength in the bilateral fingers, wrists, elbows, and shoulders. The remainder of his neurologic examination was unremarkable, with cranial nerves II-XII intact, normal sensation, normal muscle strength and tone in the lower extremities, normal reflexes, and normal coordination. He did not demonstrate any bulbar findings. His cardiac, pulmonary, and abdominal examinations did not demonstrate any abnormal findings.

His laboratory workup included CBC, CMP, CPK, and PT/INR. No acute laboratory abnormalities were noted. His EKG showed normal rate and rhythm with normal intervals and no QRS widening. His negative inspiratory force (NIF) was found to be -70 cmH2O, and his forced vital capacity (FVC) was 5 L. An x-ray of the right hand was obtained which did not demonstrate any retained teeth or other foreign bodies. He received a tetanus shot.

The regional poison control center was consulted, and the toxicologist advised the patient to hold his left upper extremity at or above the level of the heart. The toxicologist suspected the patient sensation of muscle cramping and tingling was due to envenomation. At the recommendation of the toxicologist, 5 vials of North American coral snake antivenin (NACSA) (produced by Wyeth, a subsidiary of Pfizer) was transported from a local venom unit to the hospital. The risks and benefits of NACSA were explained to the patient, with benefits including the potential to avoid intubation and prolonged hospital course and risks including allergic reaction and serum sickness. The patient verbalized understanding and consented to receive NACSA, and his RN administered the dose of 5 vials.

The patient was admitted to the ICU for frequent neurologic checks and respiratory function monitoring. The patient’s vital signs remained stable over a period of 24 hours, and the patient did not develop a decline in neurologic or pulmonary status. The patient was discharged the following day with recommendation for primary care physician follow-up.

Coral snake venom, like the venom of most other elapids, is neurotoxic. The clinical picture after M fulvius envenomation is most commonly pain and paresthesia, but the most concerning effect is a descending paralysis with bulbar findings appearing first. The primary neurotoxic components of Micrurus venoms contain complex mixtures of proteins including the postsynaptic α-neurotoxin and presynaptic phospholipase A2 neurotoxin that interfere with neuromuscular conduction (12). Deaths from M fulvius envenomations are typically due to the descending paralysis reaching the diaphragm with subsequent respiratory failure (6, 13). Respiratory function can be monitored by NIF and FVC.

Although descending paralysis is the classic neurologic manifestation of M fulvius envenomation, any neurologic abnormality may be a sign of envenomation. The neurotoxic symptoms are often delayed, with symptom onset occurring as late as 13 hours post-envenomation (14). Asymptomatic patients presenting to the ED following a coral snakebite must therefore be observed for a period of at least 24 hours with hourly neurologic checks and pulmonary function testing to ensure no delayed effects of the neurotoxicity manifest.

Phospholipase A2 derived from M fulvius venom has been found to result in myotoxicity, rhabdomyolysis, and intravascular hemolysis in murine studies (15). While rhabdomyolysis or mild CPK elevations have recently been reported from South American and Asian coral snakes, no histologic evidence has confirmed rhabdomyolysis or myotoxicity in humans following M fulvius envenomation (16,17,18).

The median lethal dose, or LD50, describes the quantity of venom required to cause death in 50% of an untreated experimental population. A lower LD50 corresponds to a deadlier venom. The LD50 of M fulvius venom has been reported to be 0.23-0.3 mg/kg intravenously in murine models (12,19). In comparison, the LD50 of M tener has been found to be 0.8-1.2 mg/kg in mice (19,20). M fulvius venom is therefore 2.67-5.22 times more lethal than that of M tener. M euryxanthus venom remains understudied in comparison, although no human deaths have been reported from bites of this species (21)

For any patient who presents to the ED after being bitten by a coral snake, initial assessment must begin with airway, breathing, circulation, and vital sign abnormalities. Particular importance is placed on assessing respiratory and neurologic status. Envenomations of US coral snake species do not typically result in laboratory abnormalities. An in-house toxicology service should be promptly consulted if available. Otherwise, the regional poison control center should be called (1-800-222-1222).

The only FDA-approved treatment for M fulvius and M tener envenomations is North American Coral Snake Antivenin (NACSA), a horse-derived IgG antibody that has been shown to decrease both intubation rates and total ventilator time in confirmed M fulvius envenomations (22). The recommended starting dose is 5 vials, but as many as 15 vials may ultimately be required (23). As neurologic symptoms can progress to respiratory failure even after antivenin has been administered, NACSA should be given as soon as the patient begins to display symptoms of envenomation. There are no absolute contraindications to NACSA, but relative contraindications include a known allergy to horse products or horse serum, prior allergic reaction to NACSA, and inability to manage a potential allergic reaction. NACSA can lead to allergic reactions or delayed hypersensitivity reactions such as serum sickness, which may manifest up to 2 weeks after antivenom has been given. Symptoms of serum sickness are diverse and may include fever, rash, myalgias, abdominal pain, and thrombocytopenia. Serum sickness management is primarily supportive, but steroids and antihistamines may be used (24). Although scarce for several years, NACSA production has now resumed and in-date product is available.

If no in-date NACSA is available, expired NACSA may be considered, but it should not be used without the consultation of a medical toxicologist and the US FDA Office of Vaccines, Blood, and Biologics (1-301-827-3524) if possible. Anecdotal reports suggest that expired antivenom that appears clear in the vial is fully effective, but opacified antivenom has reduced efficacy (25). If neither in-date nor expired NACSA is available, antivenoms produced for other neurotoxic snakes should be considered. Small animal studies have demonstrated neutralization of M fulvius and M tener venom using Mexican coral snake antivenom (Coralmyn), tiger snake antivenom (produced in Australia by Seqirus), Australia/New Guinea polyvalent antivenom (produced in Australia by Seqirus), and anticoral antivenom (produced in Costa Rica by Instituto Clodomiro Picado) (13,19,26,27). These exotic antivenoms may be carried by zoos within the United States. If providing a treatment not approved by the FDA, the US FDA Office of Vaccines, Blood, and Biologics (1-301-827-3524) should be notified and local hospital policy for experimental drug administration should be sought.

As NACSA was until recently in short supply, alternative therapies are being researched. A novel equine F(ab’)2 antivenom has been produced for M fulvius venom and has been given to 26 patients in Florida during phase 3 clinical trials (28,29). This antivenom is currently only used for experimental protocols and not for general use, and the results of the study have not been published.

Intubation should be considered in all patients regardless of antivenom administration when the FVC is less than 50% of predicted, the NIF is less negative than -30 cmH2O (eg -10 cmH2O), or when the maximal expiratory pressure (MEP) is below 40 cmH2O. In the absence of antivenom administration, patients who require ventilatory support typically make a complete recovery, but they may require up to 1 week on a ventilator (30).

Wound management should involve a tetanus vaccination if the patient’s last tetanus vaccination was over 5 years ago or not known. Snakebites rarely result in bacterial infections, and prophylactic antibiotics should not be administered (31). Antibiotics such as amoxicillin-clavulanate or ampicillin-sulbactam may be used when the patient has an established infection or a contaminated wound.