A 2 year-old female with no significant past medical history presented to the emergency department (ED) with somnolence, and decreased responsiveness while in the care of her grandfather. The caretaker reported that the child was napping in a playpen next to a bureau and was unattended for 20 minutes.  The child reportedly climbed up in the playpen and opened a drawer to obtain her grandfather’s medications which contained loperamide and citalopram. The open bottles were found scattered next to her in the playpen, but there was no witnessed ingestion. She was transported by EMS to a local community ED without incident. Prior to this event she was in her usual state of health with no fevers, infectious symptoms, increased work of breathing, vomiting, diarrhea, constipation, or rashes.

In the ED, the patient was somnolent, but arousable to painful stimuli and was moving all extremities spontaneously. Her initial vital signs included a temperature of 36.4 Celsius, heart rate of 138 beats per minute, blood pressure of 69/43 mm/Hg, a respiratory rate of 22 breaths per minute and an oxygen saturation of 94% on room air. She was tolerating her secretions and protecting her airway. Other pertinent physical exam findings on initial presentation included: 2mm, reactive pupils bilaterally, moist mucous membranes, dry skin, unremarkable cardiopulmonary and abdominal exams, normal patellar reflexes, normal tone, and no clonus.

After obtaining the EKG, the child started to become more difficult to arouse with shallow respirations and her respiratory rate decreased to 18 breaths per minute. At this time 1 mg of naloxone was administered intravenously, at which point she rapidly became more alert and agitated.

During her ED stay, the patient became progressively more agitated, had increasing rigidity, and developed clonic shaking all extremities with rightward gaze deviation. At this point, she was administered 1mg intravenous lorazepam, which diminished these signs. She required two doses of lorazepam prior to her critical care transport via EMS to the pediatric emergency department at a tertiary care center.

Upon arrival to the pediatric ED she was noted to have 9 beats of clonus of bilateral ankles. IV lorazepam was again administered, and she required two more doses of naloxone for intermittent somnolence with bradypnea and hypopnea and was subsequently started on a naloxone drip. Toxicology was consulted, and recommended repeat dosing of naloxone for bradypnea, hypopnea or somnolence, and benzodiazepines as needed for agitation, fever, rigidity, or other serotonergic symptoms.

The child was admitted to the pediatric ICU for serial neurologic exams continuous cardiac and end-tidal CO2 monitoring.  Social work was also consulted. The patient continued to improve with excellent supportive care and was discharged on ICU day 3 back to her baseline condition in the care of her family.

In this case, the patient manifested signs of two distinct toxidromes; opioid toxicity and serotonin syndrome. It is likely that loperamide was responsible for her signs of opioid toxicity including somnolence, miosis and hypopnea. After the opioid toxicity was reversed with naloxone administration, she began to manifest signs of serotonergic toxicity secondary to the citalopram ingestion.

Loperamide is a synthetic piperidine derivative that is structurally similar to diphenoxylate and haloperidol. It is most frequently used as an anti-diarrheal agent. It acts directly via opioid receptors on intestinal muscles to inhibit peristalsis and prolong transit time, and it also increases tone of the anal sphincter. It may produce opioid-like toxicity in overdose and dystonic reactions may result. A single acute ingestion of less than 0.4 mg/kg is not likely to cause toxicity, but given that our patient is only 11 kg, only 4.4 mg, or less than 3 (2 mg) capsules can cause toxic effects. For reference, a therapeutic dose is 1mg for her age group. Recommended treatment for loperamide toxicity includes supportive care as the mainstay of treatment with naloxone for CNS and/or respiratory depression. Dystonic reactions are treated with benztropine or diphenhydramine1.

Citalopram is a selective serotonin reuptake inhibitor used to treat major depressive disorder, obsessive-compulsive disorder, panic disorder and other psychiatric conditions. Many of its toxicologic effects are mediated by excessive stimulation of the 5-HT2 receptor causing serotonin syndrome. Electrocardiographic QRS and QTc interval prolongation may result. To review, serotonin syndrome is typically characterized by mydriasis, diaphoresis, agitation, tachycardia, autonomic instability (often hypertension), increased bowel sounds/diarrhea, hyperreflexia, and tremor/clonus usually greater in the lower extremities2.   Recommended treatment for serotonin syndrome includes supportive care and benzodiazepines for agitation and confusion. A serotonin antagonist such as cyproheptadine may be used as well.

A particularly interesting aspect of this case was the unexpected isolated hyperlipasemia. Her serum lipase level was greater than 400 U/L while the remainder of her hepatic profile was largely unremarkable. There have been several case reports of this occurring in the setting of loperamide overdose. Min et al. published a similar case in the journal Pancreas where a 17-year-old female had an intentional overdose with 18 mg of loperamide in the setting of a self-harm attempt. She developed epigastric pain 2 hours after ingestion and a serum lipase of 6417 UI/L. Her hepatic enzyme profile, electrolytes, creatinine, and complete blood count were otherwise normal, and the hyperlipasemia resolved spontaneously within 30 hours. The proposed potential mechanism for this phenomenon is loperamide induced spasm at the sphincter of Oddi, similar to that induced by morphine. Also, loperamide is known to inhibit the release of pancreatic polypeptide, which usually suppresses secretion from the exocrine pancreas. Without this inhibition, more enzyme can leak out from the pancreas causing this phenomenon3.

Recent literature has reported an increasing incidence of loperamide misuse and abuse. An article from the Journal of the American Pharmacists Association by Miller et al utilized PubMed to perform a MEDLINE search for case reports of loperamide abuse in the U.S. They described the characteristics of 54 published case reports from 1985 to 2016 with an upward trajectory in case numbers in recent years. Loperamide was initially believed to have a low abuse potential because of poor bioavailability, first-pass metabolism, and inability to penetrate the blood-brain barrier due to the effect of the P-glycoprotein efflux transporter. However, despite loperamide’s predominant peripheral activity at therapeutic doses, supratheraputic doses or concomitant use of inhibitors of the P-glycoprotein, CYP3A4, or CYP2C8 (e.g. grapefruit, cimetidine) can result in toxic serum levels and CNS effects4. This article, along with other recently published literature suggest that increased control of loperamide sales may be warranted4. Loperamide overdose can also be fatal- as evidenced by Eggleston and colleagues’ report of two cases of cardiac dysrhythmia and death secondary to loperamide abuse in his 2017 article in the Annals of Emergency Medicine5. An abundance of information regarding how to misuse and abuse loperamide is easily accessible via online forums, where the drug use is colloquially referred to as “lope dope.” With increasing control of prescription medications in attempts to curb the opioid epidemic, many are turning to alternative options to reduce cravings or wean themselves off heroin and other opioids. For this purpose, loperamide is often included in a variety of cocktails and concoctions in conjunction with other opioid agonists such as kratom to reduce withdrawal and increase euphoria.

Ultimately, it is unlikely that our pediatric patient’s intent was to get “lope dope,” but her case demonstrates the toxicity that loperamide can exhibit once a sufficient dose is achieved and illustrates the dangers of its misuse and abuse. Pediatric patients can exhibit toxicity at what would be considered very safe doses for adults. As demonstrated in recent literature, loperamide toxicity can result in serious adverse effects including death. It is important to counsel patients and families on proper storage of medications in the home, even over-the-counter medications that seem benign.  We also must remember that polysubstance ingestions can create a mixed picture and present with more than one toxidrome simultaneously.  Always keep a broad differential! 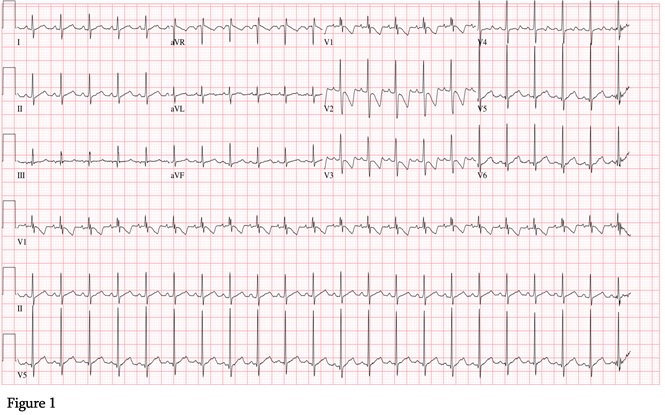