MDMA at a Glance

Regulation body temperature is complex and requires a balance between heat production and dissipation. In terms of heat production, all stimulant drugs like MDMA increase CNS metabolic activity, direct effects of the drug on the serotonin, dopaminergic, and adrenergic systems, therefore potentially hyperthermic (1, 3). In humans the main physiological route for heat dissipation is peripheral vasodilatation, with more warm blood to the skin, increased skin temperature, and heightened sweating to facilitate heat loss(3).

Shivering: It produces heat because the conversion of the ATP into kinetic energy causes almost all of the energy to show up as heat

Non-shivering thermogenesis is defined as an increase in metabolic heat production (above the basal metabolism) that is not associated with muscle activity. It occurs mainly through metabolism in brown fat and to a lesser degree in skeletal muscle, liver, brain, and white fat.

Figure1. Function of the brown fat cell(4) In response to cold, brown fat is activated through sympathetic signaling. Norepinephrine activates β3-adrenergic receptors on the brown adipocytes, initiating lipolysis of the  intracellular triglyceride storage(4). Free fatty acids are released as substrate, triggering mitochondrial respiration, which generates a mitochondrial membrane potential(5). However, instead of producing ATP, the mitochondrial membrane potential is uncoupled through the brown fat specific protein: Mitochondrial brown fat uncoupling protein 1 (UCP1), resulting in dissipation of the energy as heat(4, 5) . 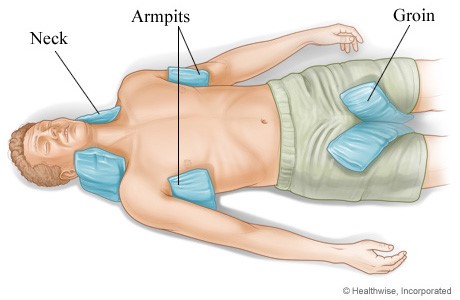