A 79 year old male with a history of constipation and diverticulosis presented to the Emergency Department with ten days of constipation.  Patient reported he had been unable to have an “effective” bowel movement during this time with infrequent small hard stools.  The patient had been attempting to treat his symptoms with enemas, bisacodyl suppositories, magnesium citrate and milk of magnesia without effect. He was referred to the ED by Urgent Care with concern that he may require manual disimpaction.

In the ED, the patient complained of persistent left lower quadrant abdominal pain and nausea. He had one episode of non bloody emesis at home, but no further vomiting. His initial vital signs were a temperature of 36.8 C˚, heart rate of 79/min, respiratory rate of 19/min, blood pressure 149/79, and an oxygen saturation of 94%. On exam, he was noted to be in no acute distress. He had mild abdominal tenderness diffusely, with hyperactive bowel sounds, and no signs of peritonitis.  There was no stool in the rectal vault.

In the ED he received a total of 500 mL of normal saline IV, 8mg of Zofran, 2mg of morphine, and 20 mg of lactulose without significant improvement of symptoms. The patient was admitted with a regimen of lactulose, polyethylene glycol and milk of molasses enemas under recommendations from colorectal surgery.

The patient’s hospital course was subsequently complicated by obstipation despite aggressive bowel regimen.  Daily labs on day one of hospitalization were most notable for a magnesium of 6.1 mg/dL. K 4.2 mmol/L, Ca 8.7 mg/dL. An EKG demonstrated sinus rhythm at 79 beats per minute, with anterolateral ST changes. The EKG intervals were a PR of 180, QRS of 106, QTc of 646 (Figure 1).  At that time toxicology was consulted with concern for prolonged QT interval in the setting of hypermagnesemia. Recommendations were given to trend electrolytes, obtain serial EKGs, monitor respiratory status and hold QT prolonging medications including antiemetics and fentanyl.

The following day, the patient was noted to have sudden respiratory distress.  STAT labs were obtained, with magnesium of 5.9mg/dL and EKG again demonstrating a prolonged, but improved, QTc of 566 (Figure 2). Potassium at this time was 4.0,mmol/L and Ca 8.8mg/dL. A CT scan confirmed a midsigmoid colonic obstruction with stercoral colitis. The patient’s acute respiratory decompensation was attributed to abdominal compartment syndrome and he was taken emergently to the operating room for a subtotal colectomy and end ileostomy.  His post-operative magnesium level was noted to be 3.9, down-trending to 2.1, with improvement of the QT interval to 450.  The patient was discharged to rehab after a 19 day hospital admission.

The differential for a prolonged QT interval is broad, and includes electrolyte abnormalities, antiarrhythmic medications, antibiotics, psychotropic medications, gastric motility agents, and antihistamines.  While hypomagnesemia is a more common cause of conduction abnormalities, hypermagnesemia can be seen in failures of excretion such as in renal failure, or excessive intake such as during hyper-alimentation. Risk of magnesium toxicity is highest in patients with intestinal and kidney disease that affect excretion; 15-30% of Mg (OH)2 may be absorbed systemically, and absorption can be affected by the presence of food, or substances that complex with magnesium cations. Urinary excretion is the major route of elimination of absorbed magnesium, however this patient did have a history of chronic kidney disease.

Elevated levels typically cause nonspecific symptoms including nausea, vomiting and somnolence, with neuromuscular toxicity characterized by diminished deep tendon reflexes being the most common finding. Minor symptoms occur at ranges of 4 to 6 mEq/L (4.8 to 7.2 mg/dL or 2 to 3 mmol/L). Generally cardiovascular effects are not seen until higher plasma concentrations of 4 to 5 mEq/L (4.8 to 6 mg/dL or 2 to 2.5 mmol/L), including bradycardia and hypotension. EKG changes include prolonged PR, QRS and QT interval. Above concentrations of 15 mEq/L (18 mg/dL or 7.5 mmol/L) can lead to complete heart block and cardiac arrest.

In this case, the patient had several reasons to exhibit prolonged QT, including exposure to antiemetics and fentanyl, as well as concurrent electrolyte abnormalities. However, his intake of magnesium containing laxatives in the setting of bowel obstruction may have predisposed him to prolonged exposure and absorption. While it is difficult to confirm what exposure was primarily responsible for the EKG changes, the normalization of the patient’s magnesium levels with concurrent narrowing of the QT interval suggests a role in his abnormal cardiac conduction. 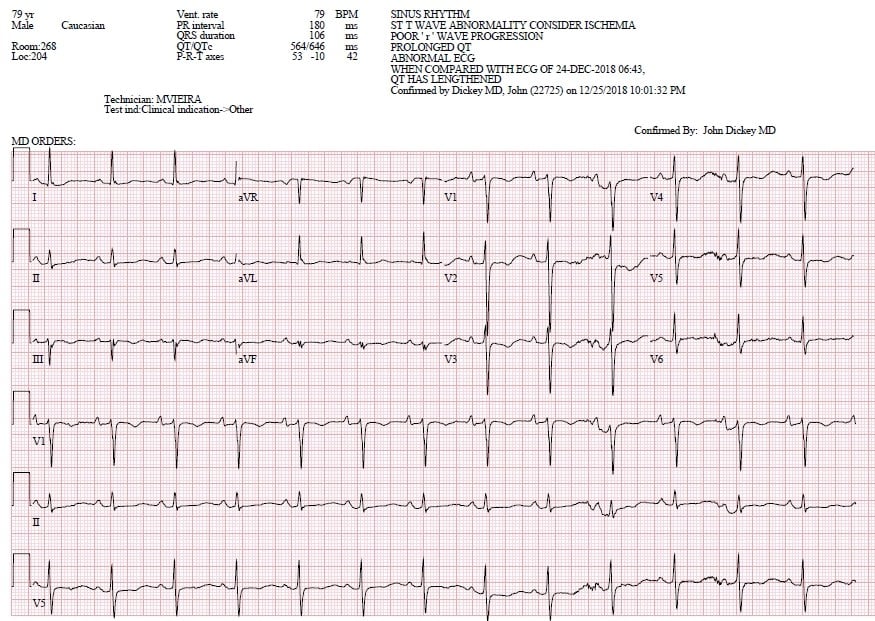 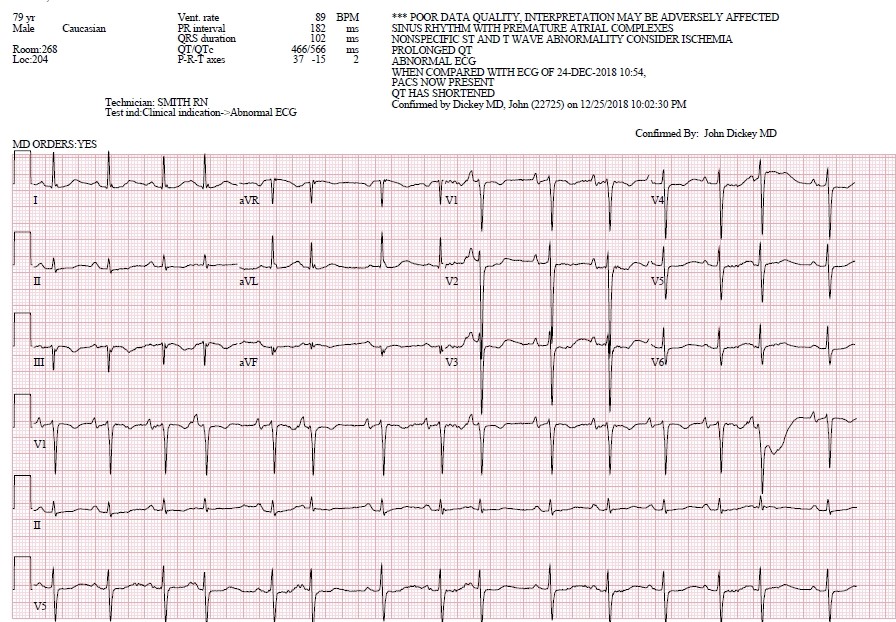