QTc: So many formulae, but which one to use?

When caring for the poisoned patient, it is essential to rapidly detect dysrhythmias or to determine the risk of the patient developing a dysrhythmia. One effect many drugs, both pharmaceutical and recreational, have on the heart is to prolong the QT interval. The QT interval corresponds to the time period from ventricular depolarization and contraction to ventricular repolarization and relaxation.

There are many drugs associated with QT prolongation including but not limited to methadone; several classes of antimicrobials; antifungals; antiretrovirals; antiemetics; antipsychotics; and class IA, IC, and III antidysrhythmics. Several electrolyte disturbances can also prolong the QT interval including hypokalemia, hypomagnesemia, and hypocalcemia. Other QT-prolonging conditions include hypothermia, myocardial ischemia, increased intracranial pressure, and congenital long QT syndrome.

QT prolongation puts patients at risk of dysrhythmias such as torsades de pointes (TdP). TdP is a rare version of polymorphic ventricular tachycardia characterized by a pattern of alternating amplitudes, or “twisting points,” on ECG. It often occurs in hospitalized patients receiving QT prolonging interventions in the setting of underlying cardiac disease or electrolyte disturbances (1). A prolonged QTc interval increases the repolarization period of cardiac myocytes, and a premature ventricular contraction (PVC) that occurs during this repolarization period can cause TdP in the R on T phenomenon, which itself can degenerate into ventricular fibrillation (2).

The QTc is considered prolonged if greater than 440ms in males or 460ms in females. A QTc of greater than 500ms is associated with an increased risk of TdP (1).

Methods of calculating the QTc

Karjalainen et al. had posited that a QT nomogram may work best for identification of prolonged QT (11). In 2007, Chan et al. developed a QT nomogram plotting QT interval duration versus heart rate as a possible better predictor for development of ventricular dysrhythmias in patients poisoned with QT-prolonging agents (15). The nomogram requires no calculations – the physician measures the QT interval and then plots the QT interval at the patient’s heart rate. If the QT interval is above the nomogram line, the patient is at risk of ventricular dysrhythmias. The initial study demonstrated superior accuracy of predicting the development of TdP compared to a Bazett QTc cutoff of both 440 and 500 ms (15). One drawback of the QT nomogram is its inability to determine the likelihood of developing TdP at varying thresholds above the nomogram line. The QT nomogram additionally cannot determine if a patient’s condition is improving or worsening over time.

The Rautaharju formula, QTc = QT * (120 + HR) / 180, is one of the newer methods for calculating the corrected QT interval. Developed in 2014 to minimize rate-dependent bias of QTc in the upper normal limits, the Rautaharju formula was derived from 57,595 cases of 46% males and 54% females ranging in age from 5 to 89 years (17). When a cutoff of 477 ms is used with the Rautaharju formula, the method has the same sensitivity, specificity, and accuracy as the QT nomogram and is superior to the Bazett and Fridericia formulae (18). Unlike the QT nomogram, the Rautaharju method allows for the assessment of the QTc in a continuous manner, providing a more reliable determination if a patient is improving or at increasing risk of TdP. Additionally, the Rautaharju formula has been demonstrated to have minimized the inaccurate corrections at extremes of heart rate present in other correction formulae (19).

Poisoning involving QT prolonging xenobiotics is common, as many medications can potentially prolong the QT interval. These patients are at risk of developing lethal arrhythmias such as TdP. The QT interval varies with heart rate, and several methods exist for attempting to account for heart rate when determining the “corrected” QT interval (QTc) and patients’ true risk of arrhythmia. Although the Bazett formula remains the most widely used method for determining QTc on automatic ECG machine interpretations, studies consistently show it to be unreliable at extremes of heart rate compared to other QTc formulae. Newer methods such as the QT nomogram and the Rautaharju formula are easy to use and may more accurately predict which patients are at risk for developing ventricular dysrhythmias. More prospective studies will be required to further determine the performance of these newer methods. 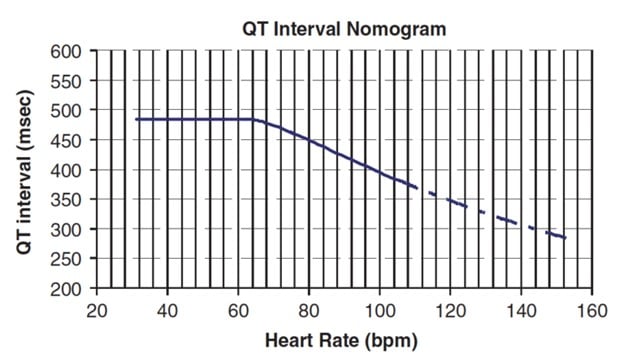 The authors would like to thank Dr. Robert Hoffman for inspiring them to learn about the Rautaharju formula and review the literature regarding the Bazett formula.