A 23-year-old female with a history of ovarian cysts presents to the emergency department with abdominal pain. She states that the pain was sudden in onset about an hour before arrival, primarily in the right lower quadrant and described as a sharp pain. She also states that she has some associated nausea with the pain, one episode of non-bloody, non-bilious vomiting as well. On arrival, she is afebrile, blood pressure is 135/65 mmHg, heart rate is 110 bpm, saturating at 100% on room air. On examination, she is tearful and in a moderate amount of distress. She has some tenderness noted in the right lower quadrant of the abdomen extending to the pelvis region. And on pelvic examination, she has exquisite tenderness on palpation of the right adnexa, no cervical motion tenderness. What would be your next step?

Ovarian torsion is a relatively rare cause of acute abdominal and pelvic pain in women. However, it should always be present at the top of the differential given its time-sensitive nature. It represents about 2.7% of all gynecologic emergencies, and its findings can be relatively non-specific, with signs and symptoms overlapping with other gynecologic, gastrointestinal or genitourinary etiologies.1,2 Several risk factors may clue physicians in to the diagnosis more readily: the presence of an enlarged corpus luteal cyst or other ovarian cysts, history of polycystic ovaries, or chemical induction of ovulation and tubal ligation.3 It is important to remember that ovarian torsion can exist in any age group - from infants to postmenopausal women. Typically, patients will present with acute onset unilateral severe pain. However, up to half of all presentations will be atypical in the sense that they may be gradual in onset or intermittent in nature.4

Ovarian torsion occurs usually secondary to ovarian cysts or masses, predisposing the ovary to twist. As the ovary twists, so does the vascular supply, initially leading to blockage of venous return. This blockage leads to ovarian congestion, producing some of the key signs seen initially on pelvic ultrasound: enlargement of the ovary and peripheralization of the follicles. As the ovary becomes increasingly congested, the distal part of the ovary begins to lose its arterial blood flow, ultimately leading to ischemia and necrosis, as seen in Figure 1. However, ovarian torsion does not necessarily occur in this order. In addition, the absence of either the arterial or venous flow, or the presence of both may be observed.2 Identification of torsion before this time is key and necessary for salvage of the ovary.4

Finding the ovaries on ultrasound is probably the biggest challenge when tasked with performing an ovarian torsion study. The unfortunate disadvantage with the trans-abdominal approach is that the pelvic organs are several centimeters away from the abdominal wall and the use of a lower frequency probe (curvilinear) will be necessary. This may limit the finer details necessary to identify torsion. Starting with an endocavitary transducer allows for better resolution of the ovaries and other pelvic structures.4

The endocavitary can be utilized as follows. With the handle held in “pistol-grip” fashion with the indicator pointed towards the ceiling, gently insert the transducer. Start by identifying the endometrial stripe in a midline sagittal plane of view. The uterus should then be scanned through in both sagittal and coronal planes (by rotating the transducer 90º with indicator to the patients right). In the coronal view of the pelvis, identify the ovaries by adjusting the probe to sit against either adnexa. Ovaries can be identified by their ovoid shape and the hypoechoic follicles contained within the ovarian stroma. The ovary can sit within many different positions in the pelvis. Several different landmarks may help aid in identification of the ovary. The ovary may be just medial to the iliac vessels, or just lateral to the cornual region of the uterus. Gentle anterior abdominal pressure on the same side may help identify ovaries sitting more anteriorly.4

Once the ovary is found, the entire structure should be scanned through in both planes in gray scale. There are several features of torsion that could be apparent in gray scale. When the venous supply becomes cut off, the ovary swells and becomes congested, as seen in Figure 2. This leads to an increase in the size of the ovary, and displaces the follicles peripherally, commonly described as the “string of pearls sign.” Other features that may be apparent are an ovarian mass or large cyst, peri-ovarian or pelvic free fluid, or a twisted vascular pedicle which may result in the “whirlpool sign.”4

Once the gray-scale features have been delineated, Doppler flow can be utilized. Power Doppler should be used as it provides better sensitivity for slow or low blood volume states. Doppler findings will show either no blood flow to the ovary or asymmetric blood flow when compared with the other side. Once the power Doppler button is pressed, a gate will appear on the screen. The gate should then be placed over, and adjusted to, the size of the signal coming from the ovary. Once activated, a pulsed-wave Doppler tracing will appear on the screen. Arterial waveforms are pulsatile and have a high-flow pattern, while venous is typically continuous with minimal changes in the velocity of the flow. Resistance to arterial blood flow into the ovary, caused by outflow obstruction, can then be calculated by using the resistive index (RI). The RI is defined as the peak systolic velocity minus end diastolic velocity, divided by the peak systolic velocity, and is usually calculated using the ultrasound machine software on an arterial pulsed-wave Doppler tracing. A value of greater than 0.7, as depicted in Figure 3, indicates high resistance which is concerning for torsion.4

Ultrasound is certainly the first-step imaging modality in the diagnosis of ovarian torsion. It could be used at the bedside, is low cost, lacks radiation, and directly evaluates both ovarian anatomy and perfusion. However, several studies have called into question the accuracy and ability of ultrasound to truly rule out ovarian torsion.5-8 In one study, pre-operative diagnosis of ovarian torsion was only confirmed via ultrasound about 46.1% of the time when true ovarian torsion was identified intra-operatively.6 Authors suggested different factors impacting the accuracy, including both heterogeneity in training of sonographers and variations in the sonographic evaluation of the ovary. Regarding Doppler flow, one study found that 61% of ovarian torsion on the right had normal doppler flow while 27% on the left had normal flow.9 This may be in part due to the dual blood supply to the ovary, or cases in which torsion was intermittent or partial. Taking all this into account, ultrasound is still an important part of the workup of ovarian torsion. However, it should be kept in mind that it is to be used as an adjunct and not a rule out for torsion. 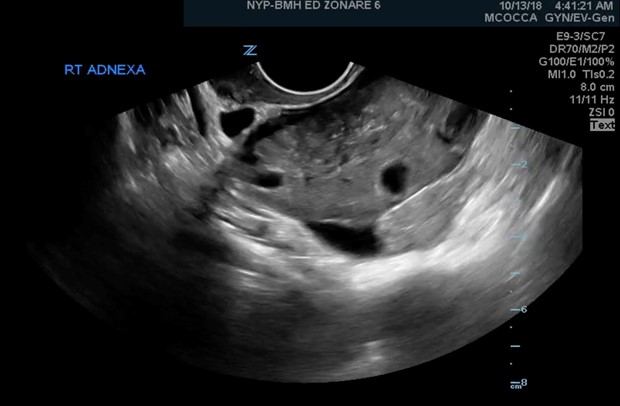 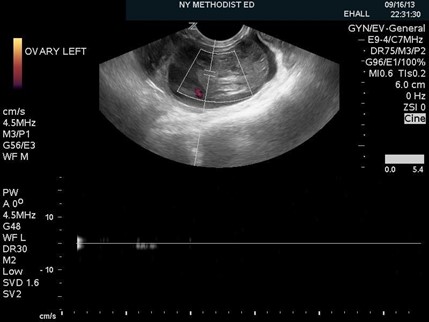 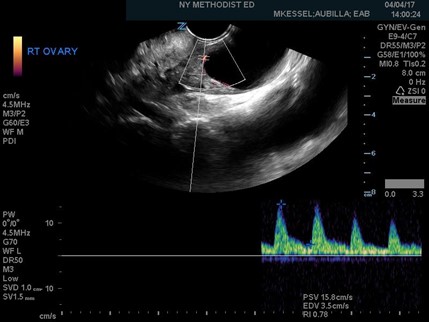 Figure 3. Ovarian torsion indicated by a high resistive index of 0.78