You barely settle in for the night shift when the EMS radio sounds. You receive report of an acute respiratory patient en route with EMS who is on CPAP and is profoundly hypertensive with an unclear etiology. The patient arrives. She is a 55-year-old female with known systolic congestive heart failure and COPD who ate some pork rinds while watching football at the local bar and gradually became dyspneic prompting the EMS call. EMS is unable to gain IV access, so after placing an ultrasound guided peripheral line, you ask the resident to perform a POCUS cardiac and lung ultrasound. The patient has greater than 3 B-lines per high power field in 8 fields, consistent with pulmonary edema. You begin high dose IV nitroglycerin boluses with quick improvement of the patient’s respiratory status and blood pressure. Now what do you do? Do you wait for physical exam changes, serial BNP reduction, blood pressure reduction, or B line changes to guide your therapy to prevent rebound hypertension and recurrent pulmonary congestion?

The ACC/AHA Guidelines for acute decompensated heart failure2 (ADHF) are lacking and without clear guidelines on the acute management. Learning mnemonics LMNOP (Lasix, Morphine, Nitrates, Oxygen, Positive Pressure) doesn’t provide confidence without evidence. Physical exam is neither sensitive nor specific for the diagnosis of heart failure. Clinical exam findings correlate poorly with invasive hemodynamics (the gold standard) which have yet to be associated with outcome improvements when employed in ADHF patients. POCUS is easy to learn, correlates well with right atrial pressures and pulmonary capillary wedge pressures with good sensitivity and specificity. It is the answer, right?

This is a complex question that Spevack and colleagues attempted to answer in a Critical Ultrasound Journal study1...

How can POCUS TTE and Lung Ultrasound help?

ADHF and pulmonary edema are catecholamine and neuroendocrine driven processes that lead to remodeling of the myocytes and nephrons, causing recurrent acute decompensations, requiring repeated hospitalizations leading to nearly $20.9 billion dollars spent annually in the US. Despite this extraordinary expenditure, post-discharge outcomes for ADHF patients have remained persistently dismal for the better part of 20 years with patients being three times more likely to die within 30 days of discharge than during the hospitalization itself2. So how do we diagnose and guide management? POCUS Cardiac and Lung Ultrasound (LUS) of course.

What do we look for?

The lungs are scanned with a low frequency phased array or curvilinear probe, vertically oriented in sagittal plane. The tissue edema of ADHF and pulmonary edema will be an artifact, or diffuse hyperechoic lines originating from the pleura and extending downward in a fan-like pattern. 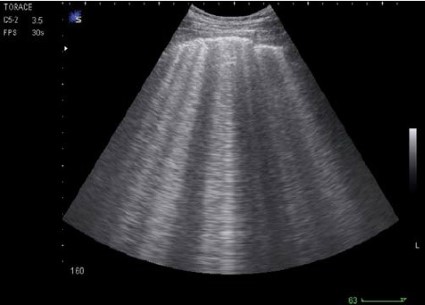 The primary limitations of the study center around the timing of the POCUS exams and the relevance of these findings to emergency physicians and ADHF patients in the ED. Patients were only enrolled following admission, with the primary inclusion criteria being the diagnosis of ADHF as determined by the admitting cardiologist. The baseline POCUS exam was performed at some point within the first 24 hours following admission of the patient. Subsequent exams were performed 24 hours following the baseline exam and the 3rd and final POCUS exam occurring within 24 hours of anticipated discharge. As we all know ADHF patients, especially patients with the hypertensive phenotype as the one in the clinical vignette presented, undergo dramatic changes in their lung water content and their symptoms while in the ED and certainly within the first 24 hours of initially presenting to the ED. This would bias the study results towards non-significance since the baseline POCUS in the study likely did not represent the patients baseline findings upon presentation to the ED. Another limitation is the fact that study was likely underpowered to detect a meaningful difference in the quantity of B-lines. Although a trend towards improvement was shown (baseline mean number of B-lines was 11 while the mean number of B-lines on the 3rd POCUS exam was 8.3), there were very large SD’s due to the small sample size. The IVC parameters showed no significant changes between any of the time intervals studied.

What to do in the ED?

The goal is to identify ADHF and pulmonary edema quickly, which first and foremost helps to exclude alternative explanations for the patient’s symptoms3 and allows us to begin focusing our efforts on management strategies to improve the patient’s hemodynamics and symptomatology. With the knowledge of the present study, we know that following treatment we can utilize serial lung POCUS to assist us in determining efficacy and can discard the notion that IVC changes will correlate with meaningful clinical improvement. Given that ADHF is not a disease state, but rather a clinical syndrome with a wide variety of contributors to decompensation, it is foolish to think that there is a single magic bullet for either treatment or evaluation. However, when we combine our clinical acumen, with basic POCUS lung skills we can begin to initiate and titrate our treatments so that they are correctly tailored to the patient in front of us.