Ultrasound-guided nerve blocks are an important tool for treating pain due to orthopedic injury in the emergency department (ED). They provide long lasting, opioid-sparing pain relief that is generally safe and well-tolerated by patients. The femoral nerve block, 3-in-1 nerve block and the fascia iliaca compartment block have become familiar techniques to emergency physicians as pain control treatment for hip fractures. The pericapsular nerve group (PENG) block has recently been proposed as a novel method to treat pain due to hip or pelvis fracture by targeting the terminal sensory articular nerve branches of the femoral nerve (FN), obturator nerve (ON), and accessory obturator nerve (AON).1

The PENG block was first described in the anesthesia literature by Giron et al. in 2018 for the use of treating pre- and post-operative pain in patients with hip fractures. It has been found to have significant effect in reducing pain with an average reduction of 7 points on a 1-10 pain scale, while preserving motor function.1 The technique of the PENG block was introduced in a case series earlier this year for the management of patients with pelvis fractures in the ED setting.2

The FN, ON and AON arise from the lumbar plexus (L2-L4). The FN passes into the thigh lateral to the femoral artery under the inguinal ligament (IL) and gives off high (branchpoint proximal to the IL) and low (branchpoint distal to the IL) articular branches, both of which provide the majority of the sensory innervations to the lateral and superomedial hip joint capsule. The obturator nerve passes through the obturator foramen and also gives off high (branchpoint within the obturator canal) and low (branchpoint distal to the obturator canal) articular branches which provide sensory innervation to the inferomedial hip joint capsule. The AON is present in about 30% of cases and arises from L3-L4.3 It descends medial to the psoas muscle, passes underneath the IL, and then dives underneath the pectineus muscle. Cadaver studies have shown that the articular branches of the FN, ON, and AON lie in the subfascial plane between the psoas tendon and the ilium and course downward into the hip joint between the iliopubic eminence (IPE) medially and the anterior inferior iliac spine (AIIS) laterally (Image A).4 Using these landmarks, a bolus of at least 20 CCs of subfascial local anesthetic can be injected to anesthetize these nerve fibers as they enter the hip capsule.5

The nerves targeted in a PENG block are the pain-sensing nerves of the anterior capsule of the hip joint, with some extension to the obturator nerve making this an effective block for femoral neck fractures, intertrochanteric femoral fractures, pubic ramus fractures, acetabular fractures and hip dislocations.1,4 These terminal nerve fibers do not extend beyond the intertrochanteric line, so any fractures of the femur beyond this point will not be adequately anesthetized and may require alternative blocks such as the femoral nerve block or fascia iliaca compartment block. 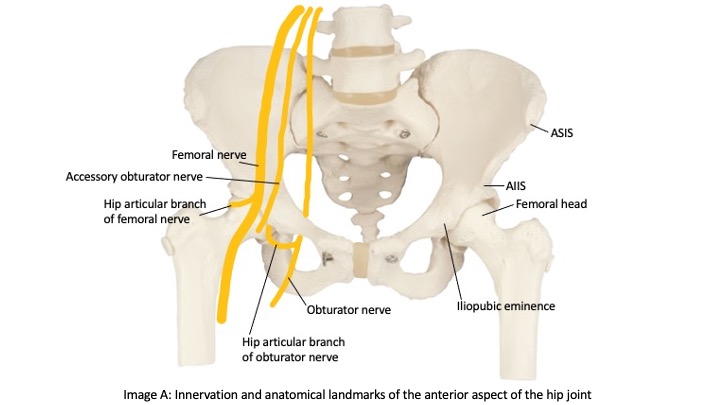 The curvilinear probe is used at an oblique angle parallel to the IL with probe marker to the patient's right side. The linear probe may be used in patients who are thin for better image resolution. Initially, the probe should be positioned inferior to the IL to identify the femoral head (Image B). Then the probe can be moved cranially until the anterior inferior iliac spine (AIIS) and iliopubic eminence (IPE) of the ilium are visualized (Image C). The femoral artery, femoral nerve, iliacus muscle and psoas tendon should be identified. The femoral nerve generally lies right above the psoas tendon on top of the iliacus muscle and is just lateral to the femoral artery. The target is the subfascial plane located underneath the psoas tendon and above the ilium. A 20G or larger long spinal needle or echogenic nerve block needle is inserted in a lateral-to-medial approach until contact with the ilium is made underneath the psoas tendon (Image D). Hydrodissection of the fascial plane using saline initially helps to visualize the correct location before injecting 20 CCs of long-acting anesthetic, such as ropivacaine or bupivacaine with epinephrine. The block has been shown to be effective with a lower concentration of local anesthetic such as 0.25% bupivacaine with epinephrine.

Care must be taken to maintain direct visualization of the needle tip in order to avoid direct injury to the femoral nerve or inadvertent intravascular injection. In a successful block, the local anesthetic should lift the psoas tendon off of the ilium and should track both medially and laterally.1,2 It may be difficult to pierce through the psoas fascia as it lies right up against the bony ilium, so slight rotation of the needle clockwise and counterclockwise can help the needle tip to penetrate the fascia into the target subfascial plane.

There are two documented cases of quadriceps muscle weakness as a result of the PENG block. Both cases described suboptimal landmark or needle visualization with inadvertent deposition of anesthetic into the iliacus muscle which likely anesthetized the adjacent femoral nerve leading muscle weakness. In order to prevent this, it may be better to inject a small amount of saline prior to the anesthetic in order to hydrodissect ensure the needle tip is in the correct subfascial space just above the ilium. Consistent needle visualization and familiarity with anatomic structures will prevent inadvertent intramuscular injection and subsequent femoral nerve blockade.6 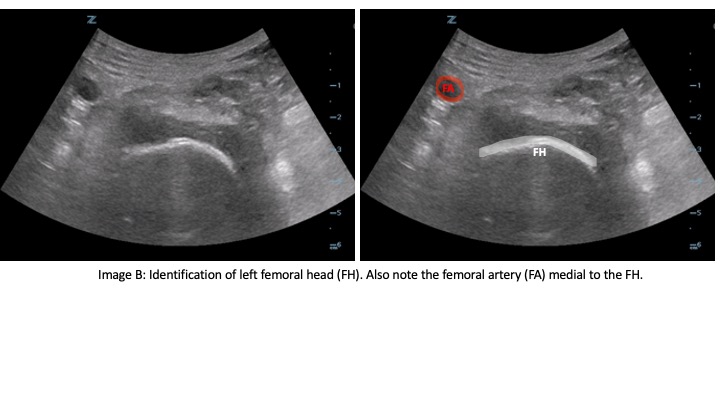 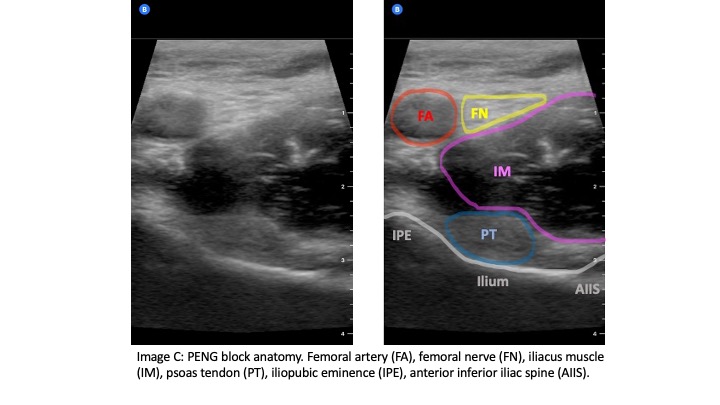 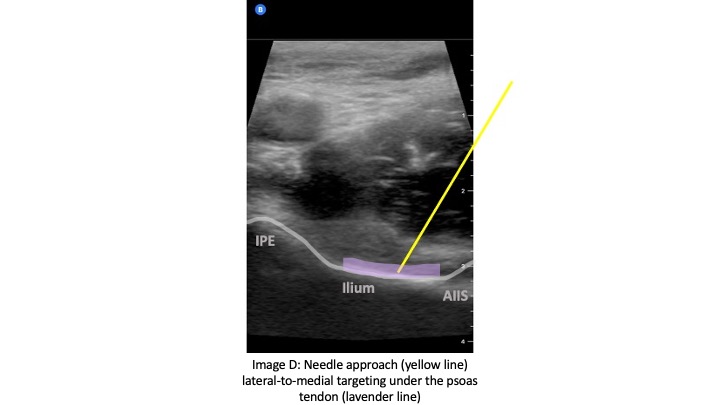 The PENG block is a novel approach to treating pain from post-traumatic hip and pelvic fractures in the ED. With the relevant anatomy identified, blockade of nociceptive branches of FN, ON and AON should be achieved with relative ease. The PENG block may have many advantages over the fascia iliaca and femoral nerve block. From our experience, the elderly population, who are more likely to present with injuries to the hip and pelvis, tend to have atrophied muscles with less definable fascia, making it more difficult to identify landmarks for femoral nerve and fascia iliaca compartment blocks. Although the probability of injecting anesthetic into the epineurium with the femoral nerve block is minimized with the use of ultrasound, there is still a risk. The PENG block targets the more clearly defined ilium as a tactile backstop instead of an intermuscular fascial plane or nerve sheath, which may theoretically increase the likelihood of a successful block and decrease the incidence of intramuscular injection or direct nerve injury. In addition, blocking nociceptive nerve branches instead of motor branches will allow our orthopedic colleagues to perform a better motor function exam and allow patients to practice early range of motion, which is important for overall postoperative outcomes. We believe the PENG block could possibly replace the femoral nerve and fascia iliaca compartment blocks for better patient care in the ED.