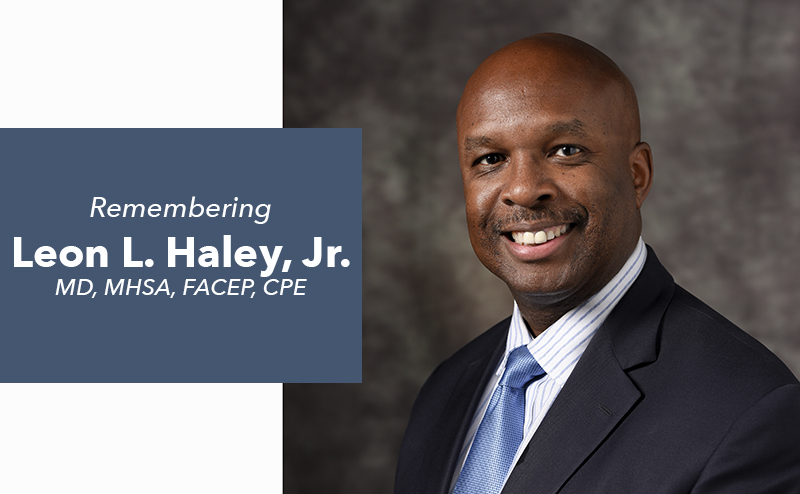 He was a member of ACEP’s Emergency Department Design Task Force and ED Accreditation Task Force. Dr. Haley was faculty for ACEP Scientific Assembly for the past three years. His popular 2019 session, “Top 5 Habits of Highly Successful Physicians,” was summarized in ACEP Now and highlighted his well-known work ethic.

Dr. Haley held many leadership roles, most recently as the first Black chief executive officer of University of Florida Health – Jacksonville and dean of the UF College of Medicine – Jacksonville. Before coming to UF, he served as executive associate dean for Emory University at Grady Memorial Hospital and chief medical officer for the Emory Medical Care Foundation in Atlanta.

“I think all of us, in many respects, embrace being first because somebody had to be first to help get us where we are, but at the same time, there are those unique challenges,” Dr. Haley explained in two-part series in ACEP Now (read Part 1 and Part 2) celebrating diversity in leadership. “There’s the ‘under the gun,’ the high expectations. There’s the feeling that you’re carrying the weight of people on your back.” He was passionate about the “art of mentorship” and spoke about the importance of connecting mentors and mentees, especially for underrepresented minorities.

Dr. Haley was an active leader both locally and nationally. His peers lauded his efforts to lead the COVID-19 medical response in his region. He served on the Florida Hospital Association’s board of trustees and on the Accreditation Council for Graduate Medical Education’s board of directors. He was also board member of the Jacksonville Electrical Authority, Jacksonville Chamber of Commerce, Jacksonville Civic Council, Florida Safety Net Hospital Alliance, American Board of Emergency Medicine, Shady Side Academy Board of Visitors and the Griffith Leadership Center at the University of Michigan. He is a member of the Omega Psi Phi and Sigma Pi Phi fraternities.

Dr. Haley was particularly interested in health administration, operations and strategic management, and diversity as it relates to health care and emergency medicine. He served on or chaired various hospital, university and national committees including the board of directors for the American Board of Emergency Medicine, Society for Academic Emergency Medicine and the Institute of Medicine’s Committee on Health Insurance Status.