Fellows’ Section: Diastology at the Bedside

A 60-year-old female with a history of hypertension and COPD presents to the emergency department with shortness of breath and cough. She also complains of gradually worsening leg swelling over several months. She is afebrile and her vital signs are remarkable for a blood pressure of 210/100 mmHg, a respiratory rate of 35, and an oxygen saturation of 85% on room air. On examination, she is tachypneic with diffuse expiratory wheezing with 3+ pitting edema to her bilateral lower extremities. You place the patient on non-invasive ventilation and perform an ultrasound of her lungs which shows diffuse B-lines bilaterally. Your point-of-care ultrasound (POCUS) of the heart shows normal systolic function. You suspect that this patient is not having a COPD exacerbation, but instead may be suffering from new decompensated diastolic heart failure. What findings on ultrasound would confirm your suspicion?

Heart failure affects 5.7 million Americans and the prevalence is expected to increase to 8 million by 2030.1,2 Almost half of all patients with heart failure have diastolic dysfunction, or heart failure with preserved ejection fraction (HFpEF), which has been associated with an increase in all-cause mortality.3,4 While several studies have shown that emergency physicians can estimate systolic ejection fraction with high accuracy, there is less data to support the same for diastolic function.5-7 However, given the prevalence of HFpEF, emergency physicians will inevitably be tasked to diagnose and treat patients with diastolic heart failure. Understanding how to identify diastolic dysfunction on POCUS can avoid misdiagnosis and errors in treatment.

Diastolic dysfunction is characterized by impaired relaxation and non-compliance of the left ventricle (LV), usually secondary to long-standing hypertension. During systole, concentric fibers squeeze the LV in a twisting motion analogous to the motion of wringing out a wet towel. During normal diastole, the LV actively uncorks and untwists. Contrary to the term “passive filling,” diastole is actually an energy-consuming process requiring ATP. This untwisting creates a drop in LV pressure, which then opens the mitral valve, and allows blood to be sucked in from the left atrium (LA) to the LV. However, with diastolic dysfunction, the heart fails to relax properly, and over time, it becomes stiff and non-compliant, which causes an elevation in LV pressures, LA pressures, and LA dilatation. When the mitral valve opens, the elevated LA pressure pushes blood into the LV. In diastolic dysfunction, blood is no longer being sucked in, but is instead being pushed in by elevated LA pressure.

Given that the pathophysiology of diastolic dysfunction is associated with long-standing hypertension and increased LA pressures, the presence of LV hypertrophy and a dilated LA can quickly give you a sense of the likelihood of diastolic dysfunction. On a parasternal long axis view of the heart, the AP diameter of the LA should be approximately equal to that of the aortic root and the right ventricle. A grossly enlarged diameter just from visual estimation, as well as an AP LA diameter measurement >4cm, suggests LA dilatation. LV hypertrophy can also be visually identified and measured as a posterior diastolic LV wall thickness >1.2 cm in women and >1.3 cm in men.8 These findings increase the likelihood that diastolic dysfunction is present. 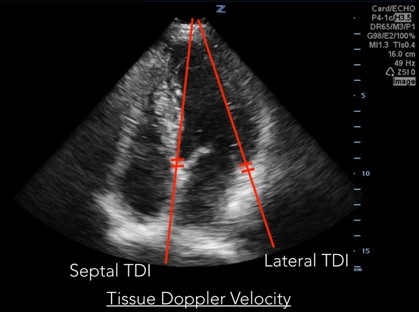 An optimized apical four chamber view is the key to obtaining accurate diastolic measurements. The septum should ideally be oriented vertically and no more than 20 degrees off axis. Placing the patient in left lateral decubitus can greatly improve image quality. Increasing the steepness of the probe angle away from the skin will transform an apical five chamber view into the desired four chamber view. In addition, it is important to know that diastolic measurements will be inaccurate in patients with atrial fibrillation, mitral annular calcification or severe regurgitation, ventricular assist devices, pacemakers, and tachycardia over 100 beats per minute. 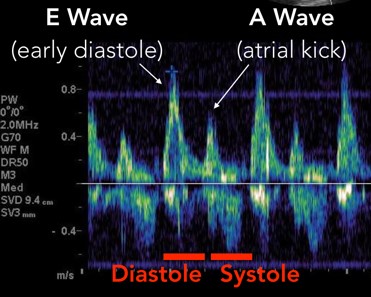 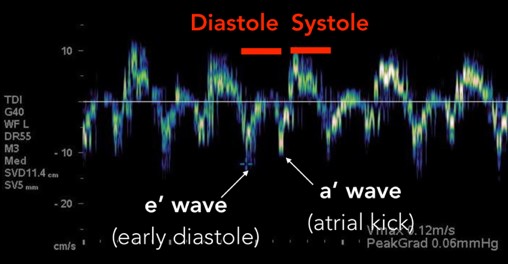 1. Isovolumetric Relaxation: The first part of diastole occurs when the LV relaxes and untwists, which drops LV pressures and creates a pressure gradient. This period where the LV relaxes prior to the mitral valve opening is called “isovolumetric relaxation.” It is seen on the tracing as a biphasic spike as there is no net movement of blood. (Figure 5) 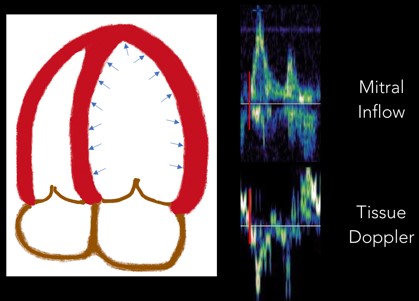 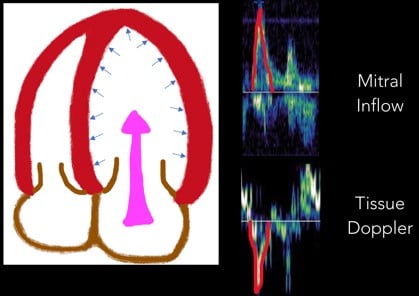 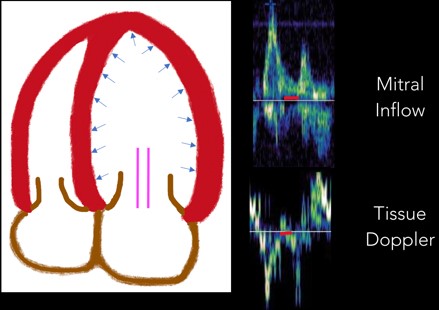 4. A Wave: Near the end of diastole, the atrial contraction creates the A wave. (Figure 8) 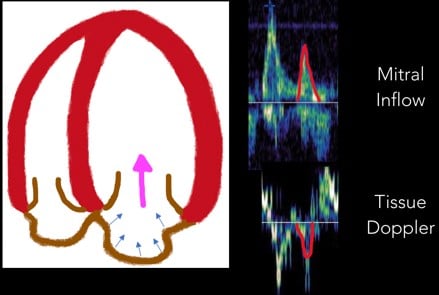 5. Isovolumetric Contraction: With the start of systole, the LV contracts prior to the aortic valve opening. This period of time is called “isovolumetric contraction” and is represented by another biphasic spike. (Figure 9) 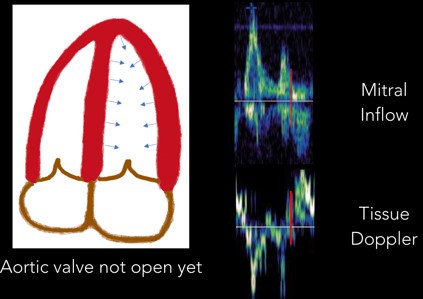 6. Systolic Wave: Once the aortic valve opens, the systolic wave is generated. (Figure 10) 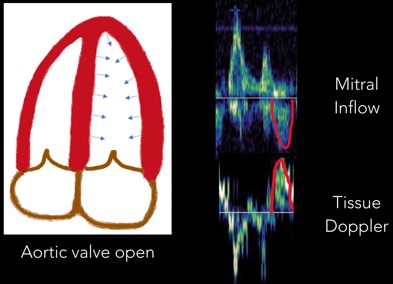 In normal diastole, the mitral inflow E wave is greater than the A wave. The majority of blood flows in through a pressure gradient and only a small percentage is pushed in by the atrial contraction, hence E>A. The Tissue Doppler septal e’ is >7 cm/sec, and the lateral e’ is >10 cm/sec. The septal e’ is generally a lower velocity than the lateral e’ since it is tethered to the septum and the right ventricle. In addition, the average E/e’ ratio (averaged from the septal and lateral e’), is a surrogate for pulmonary capillary wedge pressure. Normally, E/e’ is <10, indicating that there is no elevation in LA pressures.

During the first stage of diastolic dysfunction, the heart has impaired relaxation. The LV is like a broken vacuum. When the mitral valve opens, there is a loss of suction power that is generated from the LV in normal diastole. As a result, less blood flows in during passive filling (E wave) which causes the E wave to become smaller. More blood is pushed through the atrial contraction (A wave), which causes the A wave to become larger. Therefore, in Grade I (mild) diastolic dysfunction, there is E and A reversal, where E<A. During this early stage of dysfunction, the LV is not yet non-compliant and therefore tissue doppler values are normal. LA pressures are also not elevated and therefore E/e’ is still <10.

In Grade III (severe) diastolic dysfunction, LA pressures are significantly elevated. When the mitral valve opens, the difference between LA and LV pressures is so great that diastasis is reached very quickly with little contribution of blood flow from the atrial contraction. The E wave is at least twice the size of the A wave. Tissue doppler velocities will be low, and E/e’ will be >14. Of note is that healthy patients under age 40 may have mitral inflow velocities where E is twice the size of A due to the ability of a normal heart to relax and cause suctioning of blood into the LV at high velocities. However, these patients with normal diastolic function should lack signs of elevated LA pressures and have normal LA size, as well as normal tissue doppler velocities and E/e’ ratio.

A summary of the mitral inflow and Tissue Doppler velocities with normal and abnormal values is seen in Figure 11. 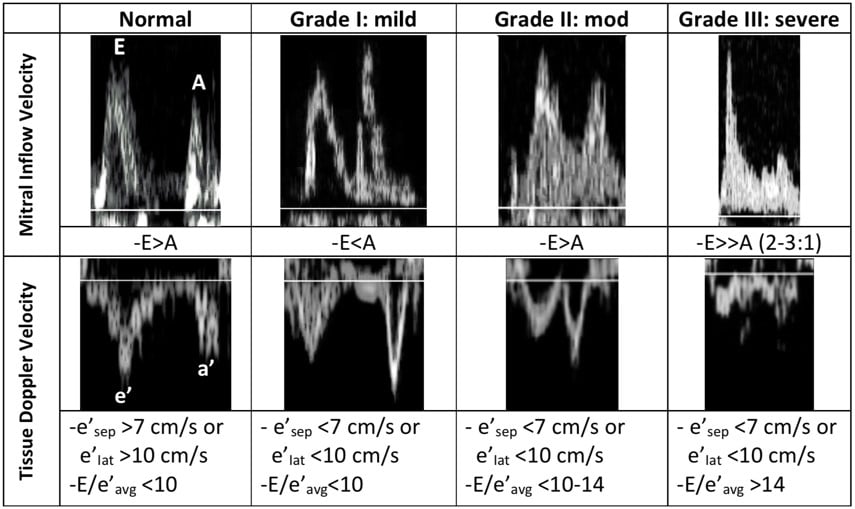 Diastolic Dysfunction in the Emergency Department

There is also more recent data showing that patients with severe sepsis or septic shock have higher mortality when they are over-resuscitated and have a positive fluid balance.14 The reasoning is that over-resuscitation causes pulmonary edema and venous congestion in organs such as the kidneys which later results in organ failure.15

Putting It All Together at the Bedside

One advantage of diastolic measurements is that it is responsive to fluid administration and diuresis. Even performing a Valsalva maneuver can improve Grade II into Grade I morphology, and is an additional way to differentiate normal from Grade II diastolic dysfunction. Tissue doppler velocities and the E/e’ ratio are generally more load independent measurements.9

In a septic hypotensive patient who may or may not have a history of diastolic dysfunction, giving a fluid challenge and then evaluating whether this fluid challenge increases LA pressures through diastolic measurements may be one way to tell if a patient is fluid tolerant or intolerant. Adding lung ultrasound to diastolic measurements to look for B-lines would be a helpful adjunct, as B-lines appear even prior to symptoms of dyspnea.16 If the fluid bolus causes a patient to move from Grade II to Grade III diastolic dysfunction as evidenced by an increasing E wave velocity and increasing E/e’ ratio, continued fluid resuscitation may cause more pulmonary edema and venous congestion. This diastolic data in conjunction with focused echocardiography, lung ultrasound, patient clinical appearance and vital signs may be useful in determining which patients would be at higher risk for injury with further fluid administration.