Lebanon is a country in the Middle East with an estimated population of around 4.5 million people in addition to over 1.5 million refugees (from Syria and Palestine). [1] Over 45% of the population is uninsured. Its healthcare sector consists of around 178 hospitals most of which are private. The EMS system in Lebanon relies on volunteer EMS agencies and providers. The Ministry of Public Health is charged with comprehensive leadership of the EMS system however there is no specific body within the Ministry that oversees the development and implementation of a national EMS plan. Previous attempts to establish a national office for EMS within the Ministry were unsuccessful mainly because of budget and resources related constraints. As such a national EMS law and national standards for education training and certification of EMS providers are lacking. Mechanisms for funding the EMS system are also not present, and most agencies are volunteer based relying on donations with minimal budget allocated to sustain operations during daytime when volunteers are not available.[2] Emergency care activities and transports are usually conducted free of charge. The two largest EMS agencies operating in Lebanon are the Lebanese Red Cross (around 4800 providers and over 80,000 EMS transports per year) and the Civil Defense (around 5000 providers, and over 33,000 EMS transports per year). Agencies have developed internal training and credentialing mechanisms for their EMS providers. Access to the EMS system by the public is done through multiple three-digit numbers which are agency specific (Lebanese Red Cross 140, Civil Defense 125). National Standards for response time to emergency calls have not been set. The level of care provided in the field by most agencies is at the basic life support level. EMS vehicles are usually staffed by EMTs only. Minimal treatment is provided in the prehospital field and includes supplemental oxygen, first aid interventions, immobilization and hemorrhage control with direct pressure, compression bandages and in some cases tourniquet application. Critical care transports between hospitals are usually conducted by teams from EMS agencies with additional physician/registered nurse/ inhalation therapist from sending hospital. Few air transports are conducted yearly by Military Helicopters with civilian EMS staffing.

EMS transports from scene by ground ambulances are usually done to closest appropriate hospital without prearrival notification. Interfacility transfers require preauthorization from the receiving hospital. The American University of Beirut Medical Center (AUBMC) is the largest hospital in Beirut and is the only hospital in Lebanon that set up in 2013 a patient transfer center to coordinate interfacility transfers with other hospitals and to ensure that patients’ needs are met during transport to and from AUBMC. [3]

Because of the high frequency of mass casualty incidents in Lebanon related mainly to conflicts, blasts, and riots, EMS agencies and providers in Lebanon have become accustomed to responding to such events. An incident command structure is usually set up in such cases with clear roles and responsibilities of responding agencies. [4,5] More recently increased coordination was noted between EMS agencies and receiving hospitals in terms of surge capacity and distribution of casualties.

This underdeveloped system however faced in the past two years three major disasters. The financial crisis that hit Lebanon in 2019 resulted in devaluation of the Lebanese Pound, severe reduction in purchase power and major civil unrest including riots.[6] Frequent MCIs drained the stockpiles and supplies of Lebanese Hospitals and of EMS agencies and caused Lebanon to be largely unprepared for the COVID-19 pandemic. Early total lockdown and airport closure reduced the initial impact of the pandemic in Lebanon however more recently because of the economic crisis, the containment measures were failing, and COVID-19 cases increased exponentially to reach around 48,377 total cases with over 1300 new cases daily and with overall hospital ICU occupancy of over 80%. Added to that, the recent Ammonium Nitrate explosion in the port of Beirut on August 4th, 2020 was one of the largest chemical explosions worldwide in recent years. This disaster resulted in over 200 deaths, 6000 injured and over 300,000 displaced. [7] It also destroyed a large part of Beirut with estimated over $10 billion in infrastructure damage and reduced the healthcare system readiness and response capabilities for COVID19 Pandemic: Three major hospitals became totally nonfunctional, and three others sustained partial damage. The national medication stockpile was also partly destroyed. Many EMS providers and first responders were among the blast casualties. Despite sustaining major damage to their stations and vehicles, EMS agencies were however able to evacuate over 200 patients from destroyed hospitals and to respond to scene for treatment and transport of casualties. The response to this event escalated immediately to an international response after the Lebanese Government called for international assistance. The Lebanese army set up an incident command structure to oversee and coordinate the overall response. Major challenges during the response to this disaster included access issues to the blast zone, the need for extensive search and rescue operations, a large influx of casualties within the first few hours of the blast which overwhelmed existing hospitals, fatality management related issues, limited public information and communication and difficulties integrating international organizations in the overall response.

In summary, the EMS system in Lebanon though unprepared, underfunded and resource limited was able to sustain basic operations over the years and to partially meet some of the prehospital care needs of the Lebanese population. Today with this triple threat of financial collapse, COVID19 pandemic and the recent Beirut Blast, the whole healthcare system in Lebanon is facing unprecedented challenges that may cause it to fail. The means to continue to respond to three simultaneous major disasters are disappearing fast and the road to recovery will be long and hard. 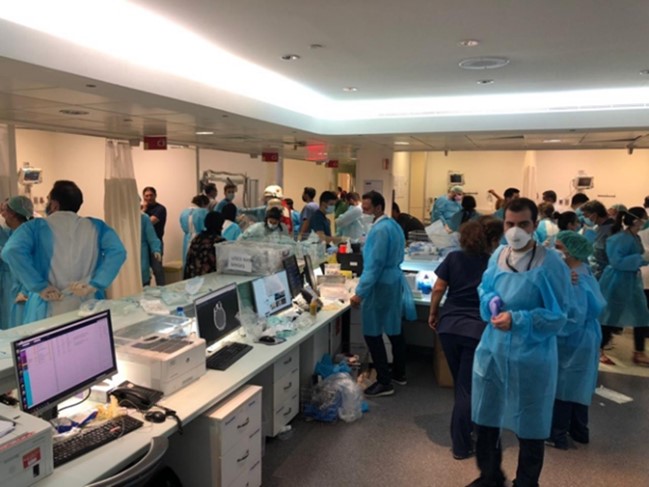 Response to blast at the Emergency Department in the American University of Beirut Medical Center. (August 4, 2020) 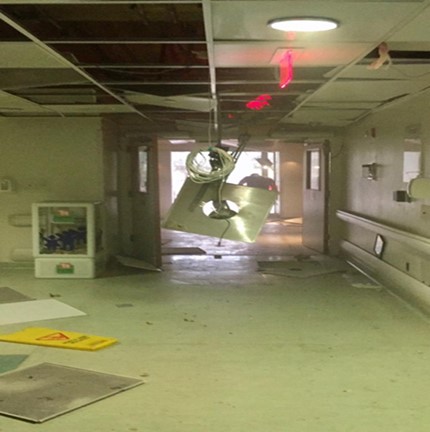 Infrastructure damage in the ED at the American University of Beirut Medical Center. 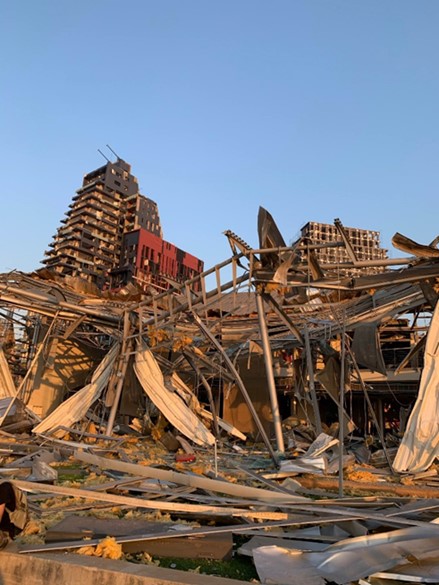 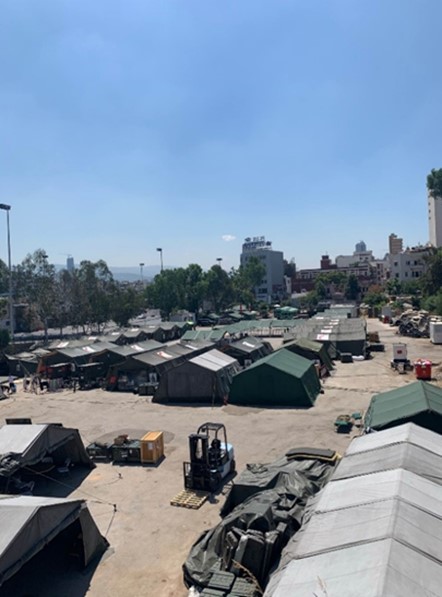 Field Hospital set up in Beirut after the Blast. 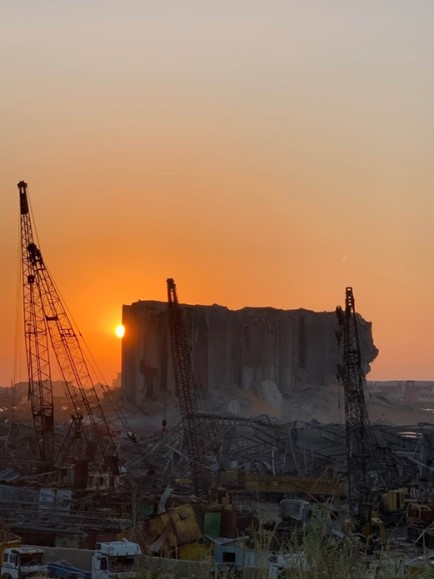 Destruction of buildings near Blast site