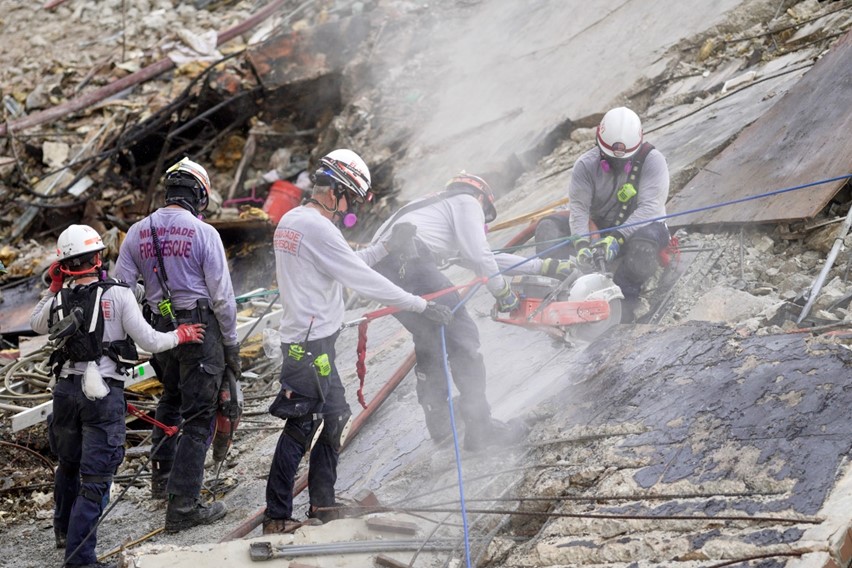 Since the building collapse of the Champlain Towers South at Surfside, Florida, disasters involving structural collapse have again been brought to the forefront of disaster response and preparedness. Isolated collapse of buildings due to structural failure is not common in the United States. However, many disasters may cause failure of building integrity resulting in similar collapse patterns seen at Surfside, Florida and resulting in similar types of victim injuries. Tornados, hurricanes, explosions, earthquakes, and numerous other catastrophes have all resulted in fatalities and injuries from structures succumbing to external forces.

Prevention measures play a role in decreasing the risk of terrorist acts that target occupied buildings. Similarly, processes that reduce oversights with the potential to impair architectural integrity can reduce the risk of morbidity and mortality from structural collapse. On the other hand, natural disasters will always be an unavoidable threat. Because of this, disaster preparation to reduce risks and improve patient outcomes from natural disasters is crucial. Becoming familiar with typical injuries that occur during building collapses will help Emergency Medicine physicians deliver optimal care during these events.

It may be helpful to think about expected injuries by using the ABCDE primary survey acronym.

Usual airway considerations in trauma are still applicable such as facial and neck injuries that may result in airway obstruction from altered airway anatomy, profuse edema encroaching on the patient’s airway, and head trauma altering an individual’s ability to protect their airway or damaging the respiratory centers in the brain. Specific to the structural collapse disaster environment, dust from the crumbling materials can combine with saliva and mucous in the airway forming concretions that reduce airway circumference and obstruct airflow. Additionally, as in the Surfside disaster, fires can be triggered. The heat generated from these infernos can produce thermal airway injury necessitating airway protection and management.

Breathing considerations also include complications from direct trauma. This includes pneumothorax, hemothorax, flail chest, and pulmonary contusion. Entrapment can cause inadequate ventilation due to external compressive forces on the chest cavity resulting in prolonged poor ventilation. Other considerations include the possibility of the patient being subjected to an oxygen-depleted atmosphere. Many deadly gases can accumulate from products of combustion displacing oxygen and reducing oxygen delivery to the tissues. Gas leaks can also contaminate the victim’s inspired air which may already be limited within a confined space. In persons presenting with altered mental status, ventilatory failure, or hemodynamic instability and extrication from a collapsed construction, exposure to toxic gases such as carbon monoxide and hydrogen cyanide should be ruled out. Carbon monoxide toxicity can be evaluated using co-oximetry and treated with airway management with supplemental oxygen, circulatory support, and hyperbaric oxygen as indicated. Conversely, test confirmation of cyanide poisoning is not readily available and so clinical gestalt in the correct context should prompt treatment per hospital protocol with a cyanide antidote kit or hydroxyocobalamin. Significant lactic acidosis may be a clue but should not delay diagnosis in highly suspicious cases.

Impaired circulation can originate from a variety of causes and should be investigated during resuscitation. Fluid volume deficits occur from excess fluid loss exacerbated by any presence of high ambient temperatures, insufficient oral fluid intake, sweating, and fluid loss from wounds to name a few. Direct volume loss from hemorrhage is another obvious impairment to adequate circulation. Basic management with proper hemorrhage control, surgical control if needed, and condition-guided blood product transfusion is critical to patient survival. Both hyperthermia and hypothermia can adversely affect circulation. Trapped persons lying against cold concrete can quickly become hypothermic. Furthermore, heat loss also occurs from victim exposure to cold air or fluids and ventilatory losses worsened by tachypnea or labored breathing. It is important to remember that rescue workers can be among the individuals that may need to be treated. Long work shifts, frequent work rotations, infrequent breaks with a tendency to inadequately hydrate, and strenuous physical labor all contribute to their risk of hyperthermia and hypovolemia.

The injured may also become wedged against or between heavy structural components. The resulting compression of body parts produces cellular injury, impaired venous return, and impedance of arterial circulation resulting in extravasation of fluid into the interstitial spaces. This 3rd spacing of fluids increases the risk of hypovolemia, decreased cardiac output, and shock. Obtaining a thorough history from EMS regarding the circumstances surrounding removal of the patient from the rubble may help the emergency physician preemptively detect and treat early hemodynamic instability, avoiding a situation of rapid patient deterioration.

A patient that has been entrapped for a prolonged duration is not only at risk for a localized crush injury such as compartment syndrome, but they are also in danger of experiencing systemic crush injury. In addition to ruling out rhabdomyolysis in those wounded in structural collapse, patients require evaluation to rule out crush syndrome. Paradoxically, removing an entrapped person can increase their risk of hemodynamic instability and death. Emergency Medicine physicians may not realize that treatment to prevent crush syndrome will likely have been initiated in the field. Search and Rescue teams are well-versed in field treatment and patient preparation for extrication to minimize the effects of crush injury. Without proper treatment beginning prior to extrication, the trapped patient with pain management may experience what is referred to as “smiling death”, being cheerful upon extrication but dying shortly afterward. When blood flow returns to previously ischemic areas, cellular products including potassium, phosphorus, creatine, creatine kinase, thromboplastin, histamine, and lactate, in addition to myoglobin, are released into systemic circulation. These products of cell death can produce dire consequences when these cellular contents are disseminated throughout the body. Circulating potassium levels can suddenly soar placing the injured at risk for arrhythmias and sudden death. Lactic acidosis produces similar consequences. Furthermore, renal failure can result from rhabdomyolysis. Respiratory distress can be aggravated by histamine release and thromboplastin can induce DIC. Search and Rescue teams will begin proper volume resuscitation and treatment to prevent morbidity and mortality related to extrication.

Any neurologic impairment should prompt standard ATLS (Advanced Trauma Life Support) evaluation to reveal any sources. Particular attention should be paid to any possible history of toxic exposures. Head injury, hypoxia, dehydration, hypoglycemia, and shock should all be ruled out and treated as indicated.

In addition to exposure in the trauma bay to avoid any missed injuries, the team should be prepared for appropriate expectations of “exposure”/removal of patients from the rubble pile. As seen in the surfside disaster, family members and First Responders are anxious to rescue anyone who may be entrapped within the rubble. The “walking wounded” may be at the surface sustaining only minor injuries and will be able to self-rescue. Those pinned by only light rubble often can be freed with the assistance of initial responding agencies. Search efforts concentrate on likely locations of live individuals. Assessment of the type of collapse provides insight into possible void spaces within the rubble where victims may have enough space and air to maintain life. Deeply buried victims require more time-consuming measures to free them. Those buried deep within the structure require extremely careful removal of debris. Dangers such as fire and HazMat threats must be safely alleviated before rescuers can work in those portions of the rubble. Controlling fire outbreaks is a complicated matter since adding water to the collapse structure increases the weight of the structure risking secondary collapse. Specialists managing the rescue must carefully balance the presence of fire as a life threat and rescue hazard against the risks of secondary collapse and drowning of potentially recoverable entrapped victims.

Dangling debris from above are referred to as widow makers and attention to reduce this risk is required as they can easily kill rescue workers below. The rubble is unstable, and the environment frequently has many hazards that require mitigation to prevent further injury to any surviving victims and to rescuers. Specialists capable of performing shoring are needed to stabilize portions of the rubble that require searching in otherwise unstable areas and provide safety zones and escape routes as needed to safely search for any survivors. In addition, they can stabilize areas for safe entry and exit of First Responders and any located victims that will be extricated. Secondary collapses can occur, and extrication work must be performed in manner that does not initiate a secondary collapse. Even vibrations from rescue equipment and machinery needs to be carefully considered. Other professionals with specialized training in breaching, breaking, cutting, lifting, and moving massive slabs of debris to safely uncover any survivors are also crucial to the possibility of any successful live recovery. These activities must be performed in a manner that minimizes hazards to the already extremely risky job of First Responders. Each building collapse is different and presents its own challenges and an individualized approach to optimize rescue efforts. These teams train and work together on a regular basis to be ready should a structural collapse occur. Physicians may be helpful in keeping waiting families informed and realistically educated should they arrive at the hospital checking on their loved ones. Urban Search and Rescue (USAR) has coined the term the “Golden Day” of survival in which 80% of recovered victims will survive. Live recovery drops from that time and survival rates continue to drop significantly in subsequent days. There have been instances when survivors have been located many days from the time of collapse and USAR teams will continue to search for survivors until such time that leaders managing the event determine live find rescue efforts will cease. No doubt, disaster preparedness will continue to build upon the lessons learned in responding to these catastrophic events and improve upon practices that increase survival rates from these unusual disasters.