The Use of TEG to Evaluate for Hypercoagulopathy Thromboelastography (TEG) is often discussed in the setting of the bleeding patient – where are my deficiencies and how can I provide targeted resuscitation or treatment? However, TEG can be equally as helpful in identifying hypercoagulable states. As our understanding of the COVID19 syndrome continues to develop, many are asking – what does hypercoagulopathy look like on viseoeclastic assays? In the discussion following, examples are derived from TEG5000 data, which we have at my institution.

Traditional coagulation assays are commonly used in acute coagulopathy, whether hyper- or hypo-, but are unfortunately limited in their scope. For example, the INR measures clot formation related to factor VII activation, a PTT is limited to assessment of the intrinsic pathway alone, and platelet and fibrinogen counts are merely quantitative and lack qualitative functional assessment. TEG provides a full assessment of a whole blood sample, through which it reports values associated with the entire spectrum of coagulation homeostasis.

When approaching a thromboelastography, one must consider all components as a whole. Each piece is an important piece to the puzzle. We will work through each piece of information a TEG provides, and how it can be utilized to detect hypercoagulable states and how to manage.

The values measured and reported as part of TEG and platelet mapping in part include the reaction (R) time, alpha angle, MA, and the LY30. Each viseoeclastic marker is described below in table 1.

General hypercoagulable states, including those secondary to sepsis or other infection

With the presentation of the novel SARS-CoV-2 and subsequent clinical condition of COVID19, hypercoagulable states are under further scrutiny and consideration. Evidence of deep vein thrombosis and pulmonary embolism are being increasingly described as part of the COVID19 syndrome, which brings about the question, what does hypercoagulable state look like on TEG? In Figure 1, a general demonstration of hypercoagulopathy secondary to infection is seen. Notably, there is a short R time, a hyper acute angle, a high MA, and low LY30; all of which corresponds to rapid factor activation, rapid fibrin plug formation and platelet aggregation, and limited clot degradation. Often, in the presence of these findings in addition to clinical findings of thrombosis, full dose anticoagulation is warranted.

Disseminated Intravascular Coagulation
Early DIC commonly presents on traditional coagulation assays (INR, platelet and fibrinogen counts) as a hypocoagualable state, ie, elevated INR coupled with low platelet and fibrinogen counts. However, with these non-specific tests, it is exceedingly difficult to tell if the body is in a consumptive state (DIC) or if it has progressed to true factor, fibrinogen, and platelet exhaustion. By obtaining TEG with platelet mapping, however, we can tease out if there is actually a hypercoagulable state underlying our traditional assays or where we are on the DIC spectrum. In early DIC, the R time will often be short (<5min), as the factors are rapidly activating, followed by steep clot propagation with a high angle, and highly reactive platelets aggregating around a generous fibrin plug resulting in a high MA (>70mm). The unique aspect arises when this scenario is accompanied by a high LY30 (>5%). Because the body is so robustly forming clots, plasmin must work to degrade the clots—or at least degrade them to a more homeostatic environment. See Figure 1 for graphic depiction.

Liver disease hypercoagulable states
As is often seen as cirrhosis of the liver progresses, the INR begins to elevate, which was previously understood to indicate an underlying hypogoaulopathy. However, with the information we can now gain from TEG, we find that in patients with cirrhosis and an elevated INR, there is often compensation for loss of factor VII production with upregulation of other factors that results in a hypercoagulable state with a low R time. As seen in Figure 2, an R time of 1.8min indicates a fairly significant hypercoagulable state, which required treatment with full dose heparin anticoagulation for treatment of an acute deep vein thrombosis, despite an INR of 4. 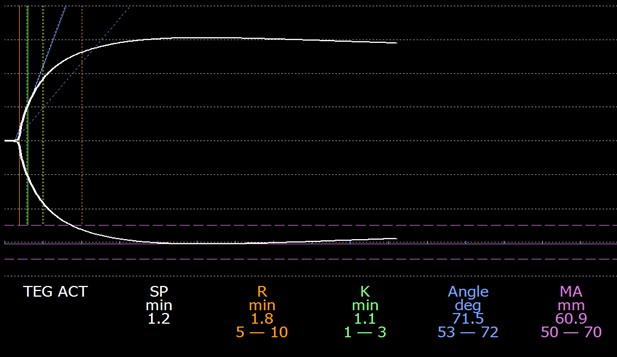