Double Defibrillation: Where’s That on the ACLS Algorithm? EMS calls ahead with notification of a 54-year-old male who collapsed while walking on a college campus. Bystander hands-only CPR was performed, and one shock was delivered by an automated external defibrillator (AED). The EMS crew arrives and states that the initial rhythm was ventricular fibrillation (VF). A total of three shocks, and two doses of epinephrine were given in route, all with on-going CPR. VF is noted on the hospital monitor, and a fifth shock is delivered. CPR is continued, and amiodarone is administered. On the next pulse check, VF is seen again, so another shock is delivered. Calcium gluconate is given, in addition to another dose of epinephrine, all while good-quality CPR is being continued. VF is seen yet again, and a seventh shock is administered. At this point, someone in the resuscitation team suggests performing double defibrillation (DD). ACLS, however, says nothing about it, let alone how to do it or if it even works. So now what?

Multiple case reports have shown the effectiveness of a second defibrillator in terminating RVF.3-5,8,9. In a large literature review, DD terminated RVF in 77% of the 39 cases. More importantly, 11 of those patients who received DD were discharged with a Cerebral Performance Category (CPC) score of 2 or less, indicating good neurologic outcomes. 2 (Figure 1)

DD can either be simultaneous (Figure 2) or sequential (Figure 3), depending on the duration of the defibrillation potential and the intershock interval between the two defibrillator shocks.4,9-12 There is currently no evidence suggesting sequential or simultaneous is more effective. There are three main hypothesized theories as to why DD is effective:

The patient received a total of three DDs that resulted in ROSC after 61 total minutes of resuscitation. Hypothermia protocol was initiated, he was found to have a 100% occlusion of the left anterior descending coronary artery in the percutaneous catheter lab. He was extubated the next day and subsequently discharged without any neurologic deficits.9                      ­­

While further research is needed to better understand DD, it is important to note that VF survival rates in out of hospital cardiac arrest can reach as high as 40-60% when combined with high quality CPR and early defibrillation.19-22 Double defibrillation, despite not in ACLS guidelines, serves as another tool during resuscitation and should be considered with other lifesaving interventions. 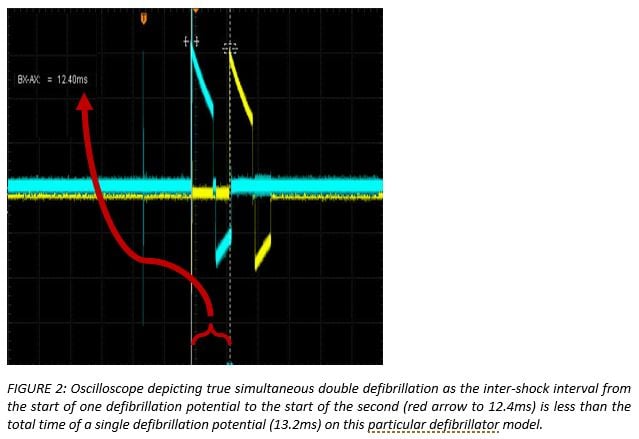 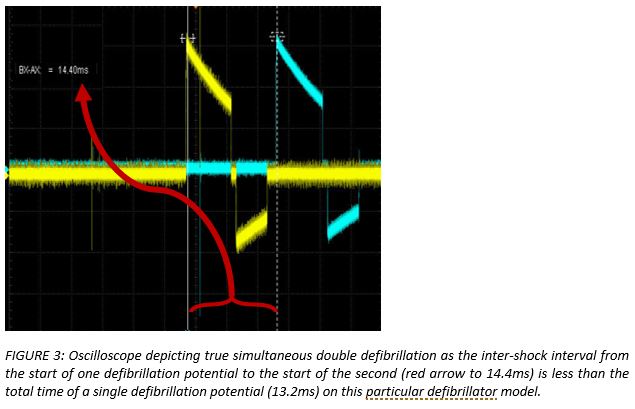 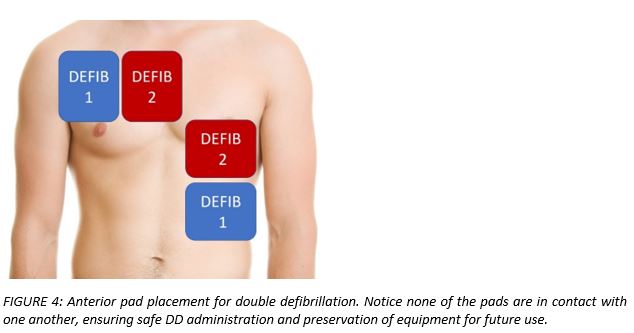