Since the pandemic began in the spring, ACEP has been concerned by reports of health care workers being threatened or silenced for speaking out about public safety concerns. Some are being removed from their duties when they are needed most.

ACEP is aware of the situation in Yuma, AZ where emergency physician Dr. Cleavon Gilman appears to be facing actions for speaking out against a lack of ICU beds at the hospital where he works. ACEP national and chapter leaders have reached out to him and are gathering more details.

The best interests of patients are served when emergency physicians practice in a fair, equitable, and supportive environment. This summer, ACEP worked closely with the offices of U.S. Rep. Roger Marshall, MD (R-KS), and U.S. Rep. Raul Ruiz, MD (D-CA), on the development of H.R. 6910, a bill introduced in the House on May 15 that would ensure every emergency physician has medical staff due process protections.

In the letter of support of the bill, then-ACEP President William Jaquis, MD, FACEP wrote, “The threat of termination or the actual termination of physicians without the right of a fair hearing prevents emergency physicians from fully advocating for their patients for fear of retribution.”

Breaking Down Federal and Regulatory Barriers to COVID-19 Care 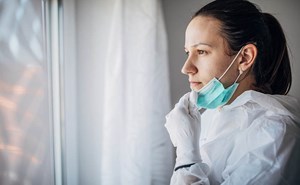