Doctors Get Sick, Too

The last several weeks I have felt up, I have felt down, I have felt too much, and at times I have felt nothing. I am restless but too exhausted to do much. I am nauseous and my taste buds are failing me, yet I am ravenous. I am awake and alert, but my head feels foggy and aches.

At the time of my diagnosis, my care team reassured me that they would do everything possible to help me maintain my sense of normalcy, to minimize the disruption that the cancer and its management would have on my life. As no one expects or plans to get cancer, I appreciated this effort to curtail its effect on me. I had just moved to a new city. I had only just started my dream career that I spent the last 12 years of my life training for. I was a wife, a busy mom to two toddlers, a homemaker. In many ways, the life I had been planning since I was an adolescent had just started. For the first time in a very long time, I felt like I had my shit together. Never, ever, in my wildest dreams was I prepared for cancer.

I tried to pretend that everything was okay. I didn’t talk about it; I didn’t think about it. I carried on with my shifts in the ER. On my second shift since knowing my diagnosis, I met a patient who resembled me in no obvious way but was also dealing with the exact same cancer: triple negative invasive ductal carcinoma. She was also recently diagnosed and had just started chemotherapy. As we were discussing her presenting symptoms, I realized I had heard very little of what she had said and my eyes felt heavy and wet. My head was in another world.

I wanted so badly to break down and confess my own situation to her, to tell her I actually, really understood her emotions and fears. Not just claim the proverbial “I understand what you’re going through.” We doctors truly mean well when we say this, and it is our best attempt to connect with our patients based on our countless hours of studying the intricate details of diseases—the history, the demographics, the pathophysiology, the diagnosis, the treatments, the side effects of treatments, the survival rates, etc. We study these in books and then experience them via the patients we take care of. We know that short of experiencing the illnesses ourselves, we cannot truly know what our patients are going through, but we try our best.

But I said none of this. This patient didn’t come to the ER to hear my life story. I had to focus on what she was saying, examine her, come up with a game plan to keep moving. I had two more new patients on my list to see, as well as about a half dozen whom I had already seen, and I needed to check on the progress of their work ups: were their labs back? Did they get their scans? How were their symptoms? Was anyone ready to be admitted or discharged? Run my list, run my list, run my list. There simply was no time to break down right now. People needed the doctor me.

You see, “doctors don’t get sick.” There seems to be this belief that, as healers, doctors must be healthy in order to care for patients, or that we are somehow immune to the very maladies that we seek to treat. It’s simply not true. After all, we are also just human. Yet, physicians exhibit a tendency to overlook their susceptibility to illness and ignore their health.1,2

This is only perpetuated within the field of medicine amongst physicians. When I started medical school, I remember being told how sick you must be in order for it to be acceptable to call out of a clinical rotation. Generally speaking, short of being admitted to the hospital or experiencing intractable vomiting or diarrhea, you were expected to be present.

Many times, the illnesses for which I write patients “excuse from work” notes are conditions that I have gone to work with. I have worked through multiple colds, migraine headaches, shingles, gastroenteritis, and several weeks of contractions at 4 cm dilated both times I was pregnant. It’s acceptable, so it becomes the norm.  Like many other physicians, if there was any inkling that I may be too ill to work, there would be an email or text trail including my symptoms with updates throughout the day or hours leading up to my shift to justify possibly calling out.

7:00 pm: Just want to alert you that I’ve developed some GI symptoms. Likely mild gastro I got from a peds exposure today, or my lunch. Still tolerating PO [per os, aka by mouth], hopefully will improve by the AM.

1:00am: Symptoms still progressing despite Zofran and Pedialyte, will keep you posted.

6:30 am: I’ve been toilet-bound most of the night, I don’t think I can make it through a shift in this condition. Sorry for the inconvenience.

I called out sick once in medical school and once in residency. The initial relief I felt that I had demonstrated a justifiable reason to stay home and rest would eventually be clouded with guilt. Am I really unwell enough not to work? So-and-so worked a shift with gastro last week . . . what will my colleagues think? Then I wonder whether I should’ve just sucked it up and gone to work.

Why does someone who is sick (and knows it) choose to work? Sickness presenteeism is the term that describes exactly this, and is remarkably high amongst healthcare professionals: up to 88% of healthcare professionals across the globe report some sickness presenteeism.3-14 In one survey of medical professionals (medical students, resident physicians and attending physicians), the majority cited they felt a professional obligation to fulfill work responsibilities when they are sick, with one-third of participants stating they felt they had a professional obligation to “work no matter what.”15 The majority also endorsed that they would work while sick to avoid creating more work for colleagues, avoid negative repercussions for themselves, and avoid appearing lazy or weak.15 Across several studies, physicians seem to agree on the reasons they go to work despite being sick.3-14

Although I am fortunate to say that I have received nothing but the warmest support and consideration from my employer and work colleagues, as an ER physician who is not working because of my personal illness during the Coronavirus pandemic, there is a varying level of guilt that I cannot shake off. If ever there was a time I was needed or could make an impact in the position I trained a decade to assume, it is now. And I’m not there.

Seeing what my physician friends and colleagues, all healthcare providers, and frontline workers are managing is astounding. I know you are all putting patients before your own families and even your own health—you are all heroes. But please, you cannot forget your duty to yourself to put yourself first. The Hippocratic Oath asks many things of us as physicians, but it does not ask us to sacrifice ourselves.

In medical school, I remember being taught that at the beginning of a code, the first pulse you should check is your own. Textbooks and algorithms will tell you that you should check the patient’s pulse first. Well, duh, that’s how you identify cardiac arrest. However, for physicians, the concept of checking your own pulse first underscores the importance of evaluating and adjusting your physiology first. You’re not set up to think clearly and quickly to handle the life-or-death situation in front of you if you’re at the height of your fight-or-flight mode, with your heart rate pounding away at 200 beats per minute and emotions running wild. You must keep your physiology in check in order to appropriately take care of the patient’s crisis. Remember, without you at your best ability, who will take care of the patient?

While a helpful saying, I think that asking a physician not to be anything less than their best health at all times may inadvertently contribute to the pressure. The message is to check yourself, fix any issues, and then take care of the patient. This puts the responsibility on the physician to fix any self-identified health issues, which can translate into “be your own doctor.” You have the medical knowledge to do so, right?

All physicians have tried to self-diagnose themselves. It’s natural. I happened to develop shingles before my first exam of medical school. In immunology, we had just learned about the varicella zoster virus, which causes chicken pox and can resurge years later as shingles, especially during times of physiologic stress. It was almost too easy to self-diagnose myself. I was evaluated at student health and the diagnosis was confirmed. When it feels like you’re living, breathing, eating, and sleeping medicine, how can you not apply your profession to yourself?

What if you feel or identify something that isn’t as easily “fixed?” What if you can’t doctor yourself—then what? There is no algorithm for this, but it seems the obvious choice would be to say something and go see a doctor.

Yet, this is so hard for physicians. Why? In a paper entitled “Illness Doesn’t Belong to Us,” McKevitt and Morgan interviewed physicians with a recent history of illness to further understand why this idea that doctors don’t get sick exists.16 Physicians cited embarrassment, guilt, and a sense of failure that they as a doctor succumbed to illness. When asked about the reasons why doctors “may not” get sick, physicians noted the importance of coping with pressure, stress, and illness that is instilled within them during medical training. “The idea that you have to soldier on is very prevalent while you’re training.” They discussed difficulty with coping with illness, eluding to an unstated belief among physicians that “illness shouldn’t affect them as badly as it does other people, and that they should ‘work on.’” And most physicians in this study did work on. They worried about the burden their absence would place on their colleagues, as well as judgment from their colleagues from being ill or being perceived as weak.

I think the following response from a physician highlights best why physicians may struggle with personal illness: “Illness doesn’t belong to us. It belongs to them, the patients. Doctors need to be taught to be ill. We need permission to be ill and to acknowledge that we are not superhuman (interview 52).”

Oh, the dichotomy between physician and patient. We are by nature entangled, yet somehow separated.

So, I have given myself permission to be a patient. I can be a physician and a patient. I am going to allow for things not to be my normal. I had already violated the mantra that doctors don’t get sick, and now I’m not going to pretend like everything was okay for me. It’s okay not to be okay. It’s okay for this to disrupt my life. I’m going to allow it the time and energy that I allow every important aspect of my life. There are things I will lose with this experience but, hopefully, more that I will gain that will make me a better person and doctor.

This is not to say that physicians who are diagnosed with a medical condition cannot work. That’s absolutely not true. Many physicians have health conditions and also provide excellent care. Rather, I want physicians to recognize and accept that doctors get sick too, and that that’s okay—it’s the norm. Do what’s best for you, and take care of yourself. 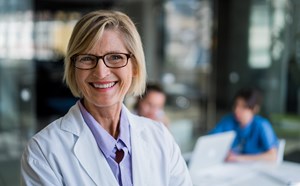 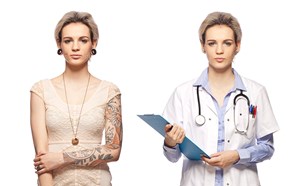